The weather is glorious up here, though there have been some torrential downpours and thunderstorms in the last two days as well. I made the most of the sunny spells and managed to get the second patch of the garden prepared at last. This area was covered with gravel (a very bright white one at that) and David and I really wanted to return it to a lawn. 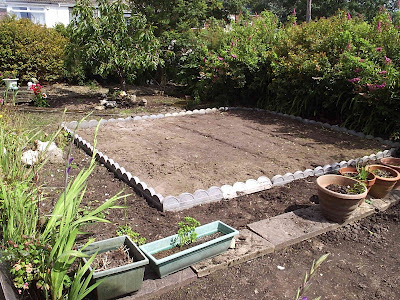 So, the gravel has been wheelbarrowed away to a neighbour's garden - yes, she did want it! Yesterday I was woken early by my two terrors, so at 7.30am I was picking out all the stray stones that had been missed and trodden in and removing the weeds and grasses that had sprouted there and along the edges, as well as cutting back all the overhanging foliage at one end. It looks pretty awful I know, but I'll share "after" pictures later this week, fingers crossed. Btw, you can just see David's red rose in the background.
It feels good to have got the groundwork done that David had been determined to do ("raunching and graunching" as he always called physical work!) but, boy, after four and a half hours my hands and arms did ache! Still do! I recently learned that we have no muscles in our fingers, so I guess my tendons are aching! It'll be worth it though, and, as you never see a fat gardener, I'm hoping that all this hard work will pay off in other ways too.
Unfortunately I can't share any of my "real" work yet, as it's all under wraps as usual, but once I get onto making samples I'll post some pictures of those.
I enjoyed watching the tennis this afternoon, with the great atmosphere and seeing Andy Murray win gold and then silver in the doubles - team GB seem to have suddenly gone mad! My darling David would have been loving the Olympics, especially the track and field, so it's tinged with sadness when I see them all doing so well.
Oh yes, another neighbour brought over a beautiful frilly pink Poppy that she had dug up especially for me yesterday. I picked a perfect spot for it, planted and watered it in and it looked really lovely. This morning I found that the single flower had been completely chomped away by those darned slugs, along with half of the leaves...ggggrrrrr! Sometimes I find my natural inability to "dispatch" anything wavering somewhat. Instead though, the offenders that were still lurking were flicked onto paper and thrown into the adjacent field, from where they will doubtless be setting off back into the garden as I type. Oh well, the Poppy will set seeds I suppose, though I am very curious as to why slugs and snails only seem to like eating flowers and not weeds.
The Cinnabar moth caterpillars have completely eaten the Ragwort leaves that they were residing on, so, as they can't fly yet, I cut the stems off and positioned them amongst other Ragworts in the lane. They should be able to survive quite happily now with plenty to eat.
Well, the (not so) little furry ones have had their supper, but I haven't, so I had better get myself something to eat now. It's still very warm here, and I had a large "brunch" after Church this morning, so I'm not that hungry really. Crumpets I think...I have recently discovered that they are low fat, low sugar and considered quite a useful addition to a healthy diet. Tasty too!
Posted by Lindsay Mason at 8:43 pm

Wow Lindsay, you are a star, working for over four hours, never mind watching the Olympics - at this rate you will be in them. Sorry only jealous that you can do it whilst I am relegated to pulling a few weeds here and there. You have done an amazing job and it will be so worth it when it is finished. David's rose is a lovely colour and how lovely of your neighbour to give you a poppy, you will enjoy them in years to come. I am still enthralled with the Olympics, although all this edge of the seat stuff is fair wearing me out! Hope you have a good week. Crafty hugs, Anne x

I could do with doing a bit of gardening right now to take away my frustration with the O2 reception down here. My mobile web device is so slow too but at least I'm on it and able to see the amazing progress you are making in the garden. well done you.
Hugs Joanne xx