Mirror, mirror on the wall...

Hello everyone, and a special hello to all the ladies who came to see me at Card-io on Saturday. It was a really fun day, very busy and lots of enthusiasm for the stamping, spritzing and spraying that I was doing!
I don't know about you, but I've felt quite sick and depressed all day after the hearing the dreadful news this morning of horrible events in Syria....it makes you wonder if humans will ever be able to just talk, agree to disagree on certain things and learn to rub along. I somehow doubt it. Especially when the news bulletins keep giving the same details about awful events, it's really hard to shake off dwelling on them and I get mental pictures that I just can't shift.
Sometimes all the horrors are just too much to take and the only thing to do is to switch off in order to keep sane. That's how I feel anyway. So, I kept the news at arms length for the rest of the day and listened to cheerful music while I worked instead.
Here's a photo of what I was working on today..... 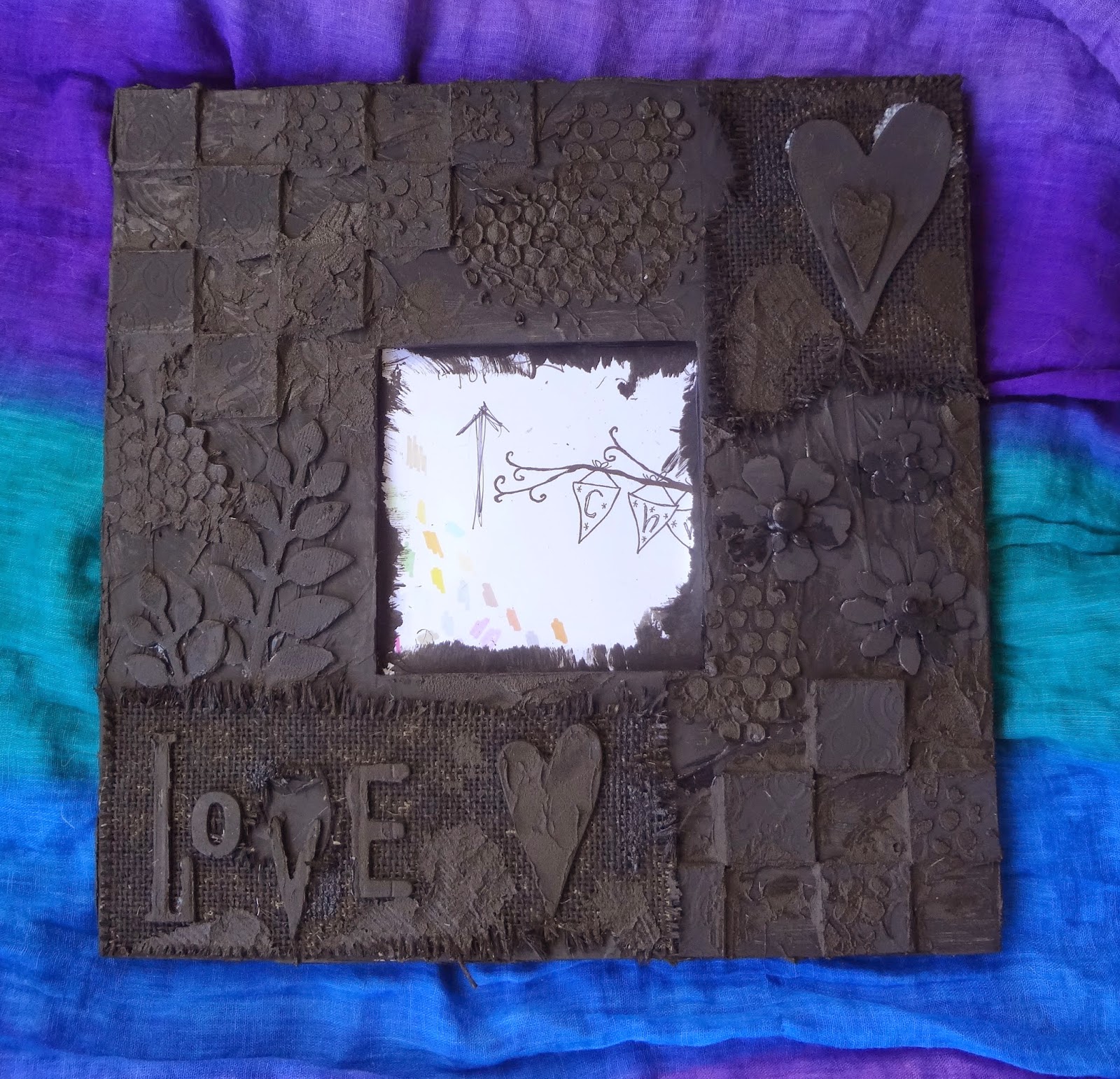 .....looks really miserable I know! Ignore the slightly odd middle which was just a scrap of paper to protect the mirror beneath it. I began by spreading white glue over the front of the frame, one side at a time, before placing old book paper on top and scrunching it up to create some nice texture.
Next I added the dimensional elements....two burlap pieces which I chopped and shredded a little, some Grungeboard squares laid in checkerboard style, die cut flowers and leaves that I stacked for extra depth and some letters and hearts. Everything was firmly glued into place - I'm using Art Institute glue these days as it's really strong and sets nice and quickly too. Once stuck, I painted the whole thing with Black Soot Distress Paint. Great - no brushes to have to clean afterwards!
I next used Wendy Vecchi black embossing paste to give extra depth and texture. I added more paste through a TH stencil to gave raised patterns to the plainer areas on the frame. Then came the worst part.....having to wait for the paste to set! I left the frame in the sunny conservatory while I had my coffee and toast! More waiting and then I was able to continue.
I brought out my two boxes of Viva Decor Maya Gold and Inca Gold and brushed the Maya Gold over some areas - some quite heavily and some using the dry brush technique. Then it was fancy finger time! Well, my fingers looked pretty fancy by the time I'd finished! I rubbed lots of colours of Inca Gold over the various textures, blending them as I went. More colour rubbed along the sides and just round the back of the frame and then I finished by adding a piece of TH paper to the back to neaten everything up.
Here's the finished mirror frame........ 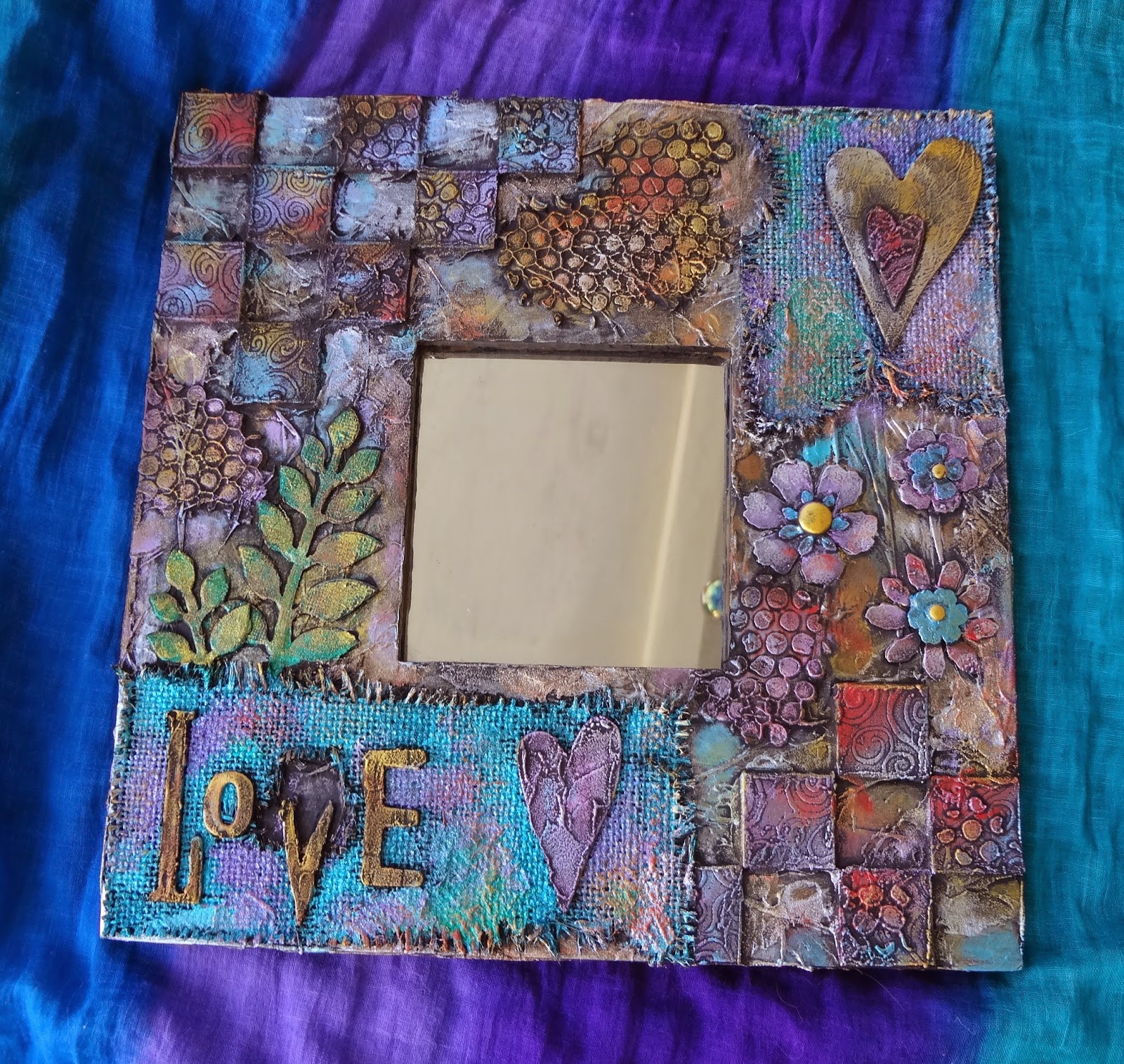 ....the picture doesn't really show up the lustre of the colours too well but you can see the general effect. The piece has now been added to my Etsy shop, where you can also see some close ups.
Well, whilst posting this I stopped midway to watch Bake Off and then Operation Wild. Both programmes have lifted my mood from the black gloom that's been hanging over me today. If you haven't seen Operation Wild I can't recommend it highly enough. Spoilers ahead here! Tonight featured a dolphin who lost 75% of her tail through an infection and who consequently struggled to swim or jump. She had more or less isolated herself and her quality of life was pretty poor. However, one man was determined to fix her and kept making prosthetic tails, none of which had so far worked. The latest one though....amazing! She was waving it in the air to show it off, she began to swim  really fast and then was able to leap out of the water - yay!The most moving story for me tonight was Champer the Moon Bear who was born with Encephalitis making her half blind and in constant pain. The veterinary team at the bear sanctuary in Laos operated to relieve the swelling on her brain and insert a tube to keep liquid drained away....brilliant. She's now a happy bear!
Needless to say, I have spent the whole hour very teary eyed - good tears though! It's just what I needed to restore my faith in human nature again - seeing the lengths that the vets will go to to help the animals. Wonderful.
Well, I had better go and let my two critters in as it's sounding a little rainy out there now. Tara is almost beside herself as I roasted a chicken this evening...her very favourite thing in the whole wide world! Once the aroma of a roast hits her nostrils she parks herself in front of the glass door of the oven and stares at it! Very funny!
Posted by Lindsay Mason at 10:05 pm

Wow what a fabulous transformation. I thought it looked cool with just the black paint on it but then when I saw the finished colourful result I simply fell in love with it. And I can def understand what you mean about the news. A friend of mine has just stopped waking up to Radio 4 in the morning and has tuned into another station to avoid the news. I did this a few years ago and it keeps me mentally more positive. Pxx

I avoid the news at all costs if I can!
Lovely mirror Lins....
xoxo Sioux

Wow! On catch up, this gorgeous, just love all those little details! Hmm! news…….trying not to let it get me down, the animal programme - YES!!! it really was amazing! Chrisx

People are daring to hang custom bathroom wall mirrors in their house. As a technician we welcome you it, but at the same time you should bear in mind that it is not so easy task to accomplish easily. You can contact us through our website, we are hearing 24 hours.

Hey Lindsay,
It is very creative design that you have post on mirror on the wall. I am highly interested. We are offering exclusive duvet cover for making your bedroom gorgeous visit here and get more duvet cover.