My Stitches samples came back today, so I'm posting some pictures here as promised. If you're coming along to my demonstration at High Legh garden centre this Saturday you'll be able to take a closer look at these and more.
The reminder is don't forget to leave a comment, if you haven't already, after my blog candy giveaway post from last week. There's still time to be in with a chance to win it as I'll be randomly picking a winner on Friday morning. Well, it may be Heather, Thomas or Tara, who picks somebody! I'll post the winner's name on Friday evening, so don't forget to call back and see if you're "it"!!
Welcome to new followers and hope you'll enjoy my ramblings, both creative and not as it were.
So, here are a few pictures with some brief descriptions of what I used. 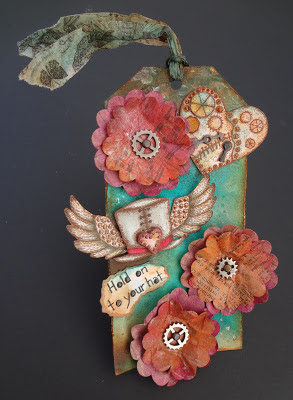 This tag was made using my Doo Lally Pip stamp set "All steamed up". The background on the tag was made using Distress Stains including metallic to give a slightly rusty, verdigris effect. I roughed up the edges and inked them with Rusty Hinge Distress ink. The flowers are simply punched out from Kraft Resist papers that I scrunched up before spraying with Dylusions inks and heat setting. I added Idealogy gears using little brads to link them to the steampunk theme. Here's a closer look at the details.... 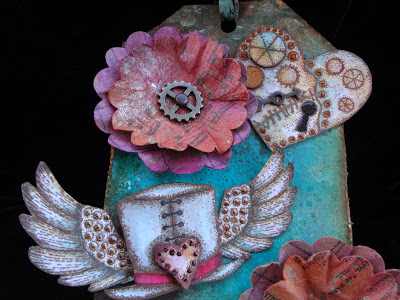 I layered up the images and added Glossy Accents to the rivets to give dimension to the tag and the "ribbon" is just tissue tape that I've folded and inked with Stains. I like the odd juxtaposition (!) of flowers with the steampunky theme!
Here are a couple of whimsical Easter tags.... 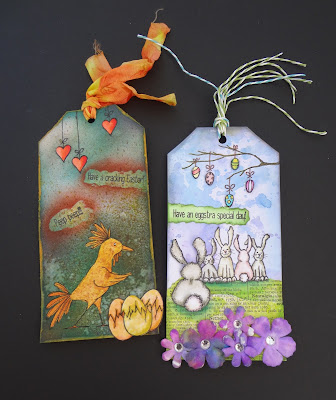 ....the left one is made using my "Peep Peep" stamp set and my Glue n Seal technique to protect the images before inking the background. I coloured the chicken using Dylusions sprays to give a speckled hen look.
The right hand tag features the egg branch and sentiment from the Peep Peep set as well as two of my Tinchie stamps - Bunny Behind and Rabbit Warren. I used inked dictionary paper to create the hillside - love that technique! 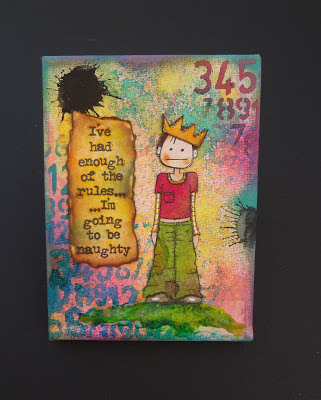 Finally for today, this little canvas was probably the piece that most people liked at the show! It seems my Moochin' character reminds almost everyone of their grandson, son, nephew etc! The canvas was simply sprayed with inks (no prep to the canvas) which I then smooched out with tissue until I liked the effect. I went rond the edges with Distress ink and the black splats were made using the Black Soot Stain in "bingo marker" fashion - such a satisfying method! I inked though the number stencil to add some extra interest in the background and stood the character on kitchen towel that I'd used to wipe up my inks with - I splodged Multi Matte Medium onto the tissue and scrumpled it onto the canvas adding more medium to allow me to clump it up. You probably can't see it here, but I sprinkled some Rock Candy Distress glitter over the "grass" too.
My favourite bit of this canvas are his clothes. I picked a couple of sheets from my pile of used, inky paper towels and stuck them down onto thin card using a glue stick. It's best to glue the paper towel down then peel back the top layer if it's a two ply tissue before adding more adhesive and smoothing the top layer back into place - otherwise it might just come adrift later. I then stamped the character onto the two different coloured pieces before cutting the jeans and tee shirt out and adhering in place over the original image. I love the way this gives texture to his clothes - makes them quite touchy feely!
Of course, he had to have the crown at a jaunty angle and the words from my "I've Had Enough" stamp set just suit him perfectly.
I'll post photos of more samples in the next few days but here's one to finish that shows just how much respect Tara has for her mums work..... 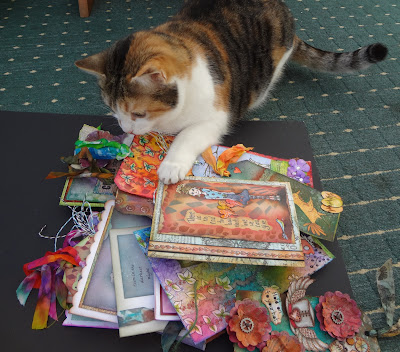 ...not sure if she was picking out her favourite or deciding which one to chew first!
The work that Tara is so casually playing with almost came at a rather high price. I had to have the plumber round again this week as the lounge radiator had sprung a leak....I still feel really strange having to call "a man in" for these things, as David would have been able to fix just about everything. I guessed that the valve screw thread had stripped when I was bleeding the radiator and so it proved to be - but I had no way of sorting it out myself besides permanently sealing the valve.
Anyway, I digress. I'd been having bad headaches along with a dodgy tummy for a few weeks before Stitches and I was sure that it was a bad reaction to an increased dose of one of my tablets. I was all set to ask the doctor to try me on a different one. Then, a couple of days before the show, I realised that the symptoms had stopped. It was only then that a thought came to me about an alternative explanation.....I'd been working in my Doo Lally room for hours and hours each day and, with the freezing weather, I'd had the gas wall heater on as well as the radiator...it's a chilly room otherwise. The symptoms had stopped when I'd finished working in there in the last couple of days. Mmmmm....I thought....suspicious! So, I asked the plumber to check the heater and he said that I'm lucky that I didn't fall asleep and never wake up! He's turned the gas off to it for me and I will now have to pick up a halogen heater to top up the heat in there instead.
Thank goodness I twigged what the cause could be though. To think, I've been working away in there and breathing in gas fumes the whole time! Yikes. It pays to check these things out.
Okay, that's me signing out for today and....don't forget....leave a comment on the blog candy post.

PS in reply to several queries, yes, I will be at this year's Craft Barn Extravaganza and this time I'll also be teaching there on the Friday as well.
Posted by Lindsay Mason at 5:23 pm

Good grief! Thank goodness the plumber came! Look forward to seeing you(and your stamps and samples) on Saturday-bringing Em with me! Hugs, Chrisxx

Lovely tags;) Glad the gas was sorted before anything more happened.
xoxo Sioux

Hi Lindsay, your samples look amazing. Love the photo of Tara :-)Glad you sorted the gas out....we had to have our fires disconnected because of that.....I was hoping to come and see you on Saturday :( Can't make it now.....But we'll catch up soon...Will be in touch. S X

First of all GORGEOUS tags. Just love the colours and the perfect use of your stamps. Plus, Tara is just too frickin cute lol. As for the headaches and Gas OMG!!!! Thank goodness you had your wits about you. You can get little stickers which will alert you in the future. Found this on Amazon uk

Maybe ask at your local hardware store if they have some.

You gave me a scare when you told me about the fire the other day and I wondered whether he had checked your living room fire too????? As for that chicken - it's so funny. I can see it going 'peep peep' down the road with road runner and Tara running after it. Love it. I really really need to talk to you about showing us how to do some of these techniques you have used for these samples. I have a little idea and so hope to convince you to give it a go - what do you think folk - we need Lindsay to show us how don't we???
xxxx

Thank goodness you are okay, & everything got sorted.

Hope you can rest up & re-charge after your busy few weeks.

Thanks for all the lovely comments and concern about me nearly being gassed! It was only the one fire that was the problem - separate to the the central heating system and when the plumber gently pulled at it, it just about came away from the wall! I'm getting a halogen one today hopefully, as my Doo Lally room is darned nippy!
Off to meet my sister in town this afternoon and having a sleep over too so won't be emailing peeps till tomorrow evening...blog candy winner to be announced then too...I am practicing drum rolls already! Lindsay x x

Hi Lindsay Your tags are absolutly gorgeous. What a close shave you had there with the gas, thank goodness you are ok you have a guardian angel watching you. Hugs Mo x