Thank you for all the lovely comments on both my last post and the blog candy post (don't forget you need to comment on that post titled "blog candy giveaway" to be in the draw). It's always good to know that the stamp designs that I work so hard on have hit the right note so to speak.
I thought I'd share a couple more pictures from the show - and I'll post more samples when I get them back as they're being photographed at PI headquarters just now.
This is a great shot of Rachel with someone that most of you will recognise - Andy Skinner who is as lovely as he is talented which is saying quite a lot! A true gentleman and one of my closest friends...annoyingly though, we hardly got a chance to catch up at all! 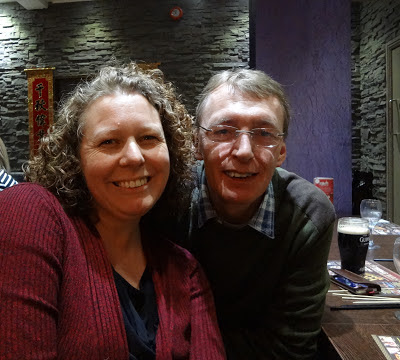 Here's a picture taken at the Sizzix stand with Paula showing the beautiful flowers made from Sizzix dies. They were amazing. The Sizzix stand was so inspirational, with detailed displays which had been dressed beautifully. 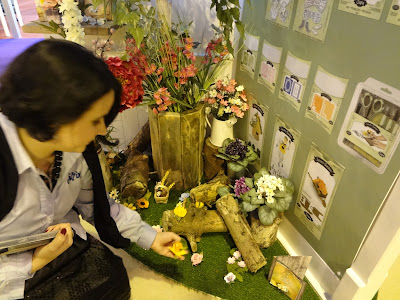 I met up with so many people at the show but didn't get photos of everyone of course. My friend Paul visited the show, so I got lots of big hugs and you can't have too many of those! I had a lot of catch ups with Lynnda and Elaine from Oak House Studio too. The whole event really did me a lot of good as everything was so positive and I was with my "second family" - the PI team, who are a great bunch of people. Lots of people told us that we had the most inspirational demonstrations at the show, so that was very good to hear. I had a couple of bad moments when two people, within ten minutes of each other, who I've not seen for quite some time, asked me how David was. I wasn't quite prepared for that and it gave me a bit of a sideways knock. I ended up feeling bad for them though as they felt so awful...it's one of those things.
I've been out with my sister Heather today, visiting our mum and then doing some grocery shopping as I was out of just about everything. I had a fresh delivery from the Beanie coffee company today too, so, once I've posted this I'm off to make a cup of double chocolate flavoured coffee - it's sugar free too, so not even any guilty feelings! It's freeeeeezing cold here today so I'm planning an evening snuggled up with Tara on the sofa - she has finally realised that it's nice to be stroked and made a fuss of. She was in a family with children who teased her, so it's taken her a long time to trust me completely. Thomas doesn't do cuddles on the sofa, he's strictly guard duty...sitting by the door when I have a shower, keeping me company in the kitchen when I make dinner and making me laugh with his charging around the lounge after his toy mouse. Cuddles with Thomas are at bed time and he's a purry, furry hot water bottle under the duvet!
Right, there's a coffee cup with my name on it! Don't forget to comment on the blog candy post by next Thursday.
Posted by Lindsay Mason at 4:20 pm

Great photos! Love that Thomas keeps you warm - our cat used to do that but would start licking feet….AAggghhh!!! Thanks so much for becoming number 30!! Hugs, Chrisxx

It was good to see you again Lindsay and you certainly looked like you were enjoying yourself. You can't beat crafting in good company!!

I followed a lot of the Stitches stories on FB with glimpses of amazing art and projects so your blog posts have now capped it all off. February is an exciting time for us crafters with all the new stuff coming out despite most shops taking an age to stock it or in some cases, not even getting anything new in at all. I so want Andy's new stencils and he has stirred some enthusiasm in me to do a bit of crafting again which is so lacking just now. I absolutely love all the bright colours on your samples and the fun themes. I think you will have a great time this year demonstrating them all. No warm snuggles at this end which are sorely missed.
xx

Great to see all your photos. It was lovely to get cuddles from you too. I have returned from Stitches with a renewed vigour for crafting. I've even started to clear out my crafty space lol. Enjoy your weekend. Pxx

Just catching up with your blogging Lindsay.. great to hear everything went well.. mmmm... your coffee sounds fab ♥