How did that happen?

I mean, it's ridiculous... it would seem that a whole week has gone by since I last posted on here, and yet I'm sure it was only about four days ago. Where are these days disappearing to, that's what I should like to know! It was last Saturday that I whizzed down to Peterborough for my date at Sir Stampalot and yet, I'm sure that should make it about Tuesday now!?! Maybe I'm a time traveller without knowing it - just a shame that time keeps speeding up instead of slowing down once in a while!
I had a straightforward journey to Peterborough and arrived around lunchtime. It took me quite a while finding my hotel as there are lots of subways, bridges and little stairways in the city, so I got a little confused! Unfortunately it wasn't a great place (somewhat grubby to say the least) and I had an unfortunate incident with a dodgy kettle which resulted in boiling water going all over my right hand. Thankfully, a silicone glove (don't ask!) filled with cold water, and a night spent with my hand wrapped in a wet towel saved the day, or rather, the hand, and, despite it being sore and very red, it didn't stop me from keeping the show on the road. And, yes, I have complained to the hotel about it. It was evidently one of those days though, as one of the wheels broke off my case as well! 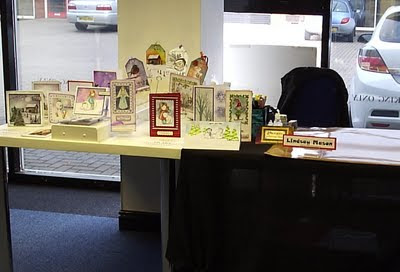 Next day I was at Sir Stampalot - my first visit there, but I hope not my last - watch this space! Janice and Andy were absolutely lovely and really looked after me. Hello to everyone that I met there - including new followers and readers (you know who you are!) and hope you're enjoying using the "Hob Nob Special" card!!! As you can see from the above photo, which only shows part of my table, I had loads of room to work in and to display my cards and tags etc. You can just see one tag peeking up at the top which was my version of a beautiful tag that Andy posted on his site last week...if you haven't seen it, do check out Andy's blog in my list on the left.
It's not only me that's been busy this week - David had replaced the wheels on my case, built up the stand on the other side (to keep it balanced) and fixed my scanner...all by Wednesday. I don't call him SuperDave for nothing! So, I didn't have to say a sad farewell to my little case which is affectionately known as "my Tardis" after all, and, even better, I will be able to pull it along behind me without waking everyone within a three mile radius! Its poor old wheels have been getting wonkier by the week and it was making a terrible racket...now it glides along in near silence - bliss! It's ancient, but it works for me.
I had a reasonably quiet journey home too, apart from about half an hour of sweary, lairy nonsense from some idiots between two of the stations...not hard to know that the football season has started again!!! I did get chatting to a couple of elderly chappies who were like something out of Last of the Summer Wine though. Apparently they had decided, on a whim, to go from Sheffield to Skegness the evening before. It had cost them £90 as they went by taxi! They didn't arrive until very late that night and couldn't find anywhere with vacancies. One of them has a bad leg and uses a walking stick, so they called an ambulance, he complained of awful pains in his leg and they took him to hospital, along with his mate, where they spent the night! They were like a couple of naughty children and I don't think they realised just how much trouble they could have got themselves into, let alone all the resources they doubtless wasted! I do meet some characters on these trips!
I have been finishing some drawings that I've been working on, as well as making lots of samples for my demonstrations this weekend at Weavervale Garden Centre in Northwich, Cheshire, tomorrow and at Grimsby Crafts in....mmmm...Grimsby (!) on Sunday. Because I have to get to the station straight after I pack away, tomorrow's demonstration is from 9.30am until 3.30pm. I'll be using my new Christmas stamps as well as some lovely Gorjuss ones along with new Christmas papers from My Mind's Eye Lost & Found range. This card features the stamp called "The Winters Night" as well as some of the MME papers and matching fancy brads. I also added a pleated tissue tape frill and three red gems. Great image this one, as it's more wintery than specifically Christmassy so can be used in many ways. 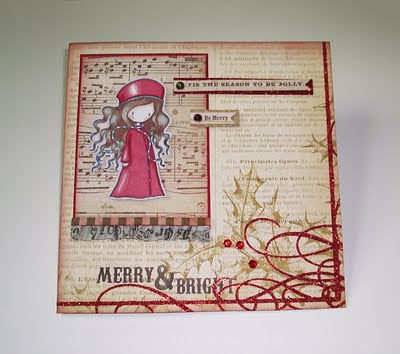 Next is a collaged card using two of Andy Skinner's stamp sets, "Simply Angelic" and "Let the Festivities Begin". I combined these with the MS holly punch, a little inking and faux bleaching and just kept it simple. 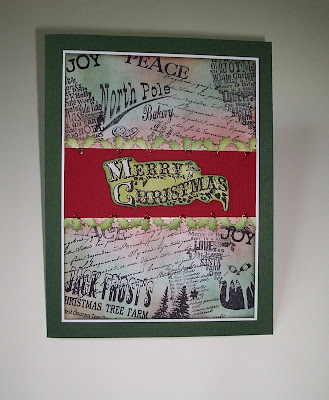 Here's a soup tin that David kept and washed out for me. I've wrapped it it in more of the MME paper and used some of the matching layered stickers and lace ribbon to finish it. Good old tissue tape came in handy here again! I've not made the inside fancy at all, as I plan to put a few twigs in it to display some other items that I've been making for tomorrow...that's if I can find the right sized twigs anyway! 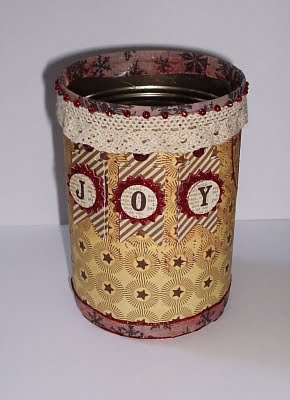 Hope to see some of you in Northwich or Grimsby over the weekend for some creative fun. Until next time, have a great weekend, whatever you're up to, and make the most of the sunny days that are left before Autumn starts to properly kick in.

Posted by Lindsay Mason at 4:58 pm

Hello Lindsay
Just managed to have a quick look at your blog. It was very nice to meet you in "Sir Stampalot",thanks for your helpful tips. Managed to buy the last bottle of Stazon cleaner & hope to be trying it with the alcohol inks this coming week together with some of your stamps that I also bought. Glad you got home safely & sorry to learn about your hand hope it is all O.K., now. By the way I'm the one who arrived very late with my husband in tow & we were the last to leave. Best regards! Rita

Oh your hand Lindsay. That made me cringe so hope all is well now. Love the display at P'borough. I enlarged the photo for good 'ol nosey. Enjoy the weekend. Grimsby is'nt all that bad and the dock area is quite interesting especially around the tower.
Big hugs Joanne xxxx

Wonderful projects, Lindsay and I especially like the Gorjuss Girls one!
I hope your weekend goes well. I picked up my elf stamps from Samuel Taylor today and will be giving those an outing as soon as I can!
Take care
Diane x

hi met you in Northwich I was first there as I live 5 minutes away!! I loved the demo as I learnt so much. Bought inks, paper and archival ink. Promised myself I will not play till this 21st album is finished.Thanks for all the help you are a true crafter. Kathie.