Hello blog followers and apologies for my absence...a combination of being really busy, very tired and an annoying advert thing that keeps popping up when I come to my blog page that has been driving me crazy. It seems to have stopped coming on quite as much now so I'm keeping my fingers crossed.
What's been happening since my last post? Gosh, I have to stop and think - don't know about you but the days very easily run one into another. Mainly it's been me at home, in the Doo Lally room, making as much as I possibly can for the Christmas Market and my last two demonstration days of the year. I'll be at The Craft Range in Burnley this Thursday when they have their craft event in the evening from 4.30pm until 8pm.

It will be a great evening with lots going on as you can see.
On Saturday 29th I'll be back at Card-io in Wigan where I'll be working with Viva Decor products as well as dies, stencils, modelling paste etc. Hope to see lots of you at one or other (or even both!) of the events.
I'll have another few days after that to get the last things made for 5th December when I have my stall at Poulton-Le-Fylde Christmas Market. I'm really looking forward to it but I'm hoping that the weather will be kind and stay as sunny and dry as it has been lately - I can cope with the cold (just!) but wind or rain would be another matter! As well as lots of festive stalls there will be fairground rides, the lighting of the Crib outside St Chad's Church, Carol singing and the event will finish with the arrival of Santa Claus in the square!
Other than head down, full production in process not a great deal else has been happening.
Last week though, Heather and I went into Blackpool to do some window shopping and we both needed some footwear - boots for Heather and a pair of shoes for me...my only pair of black shoes had become peep toes which they were not intended to be! We also chose to go into town that day so that we could visit HMV where Alfie Boe was making an appearance to launch his new album, Serenata. Although we weren't buying the CD we were able to get a good look at him (Lol!) and take a few photos.... 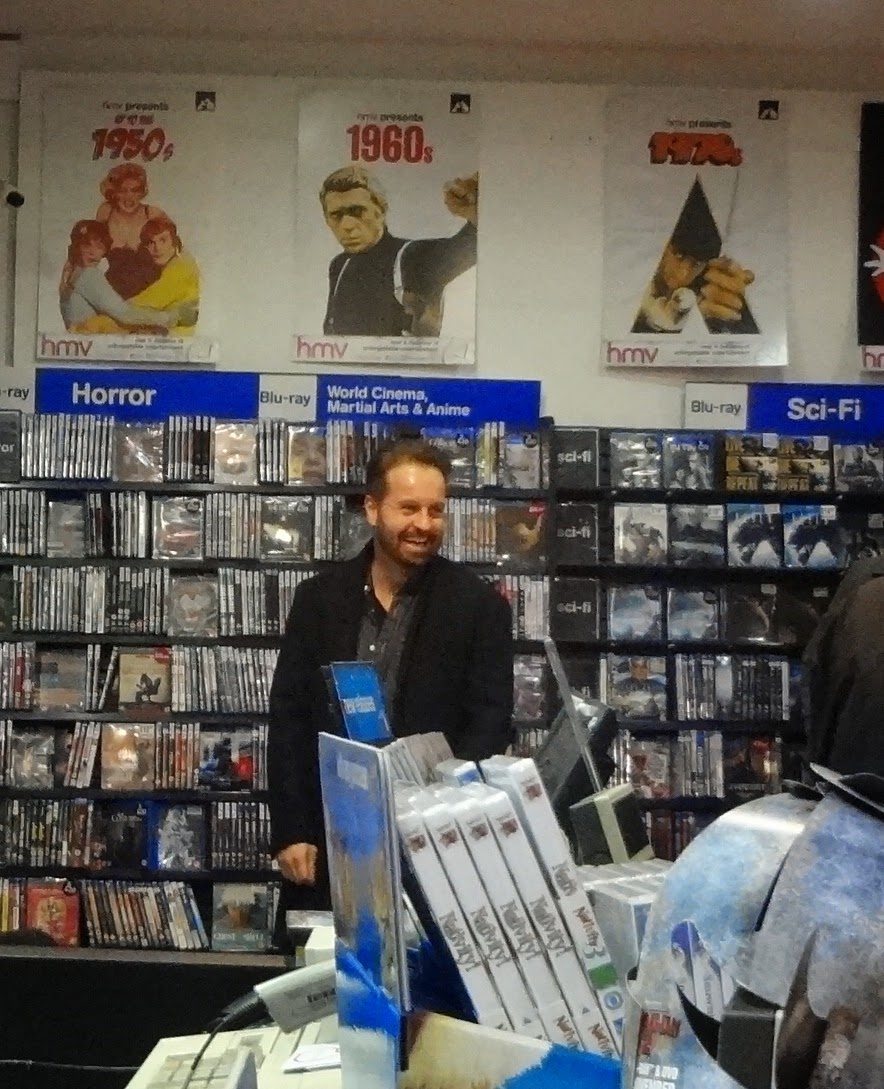 ....definitely worth a good look at I think!!! He really is a lovely, smiley man. We saw him in concert last year and he's not a bad singer either! ; )
Last week I had a little visitor to the garden - I know there are hedgehogs about as they leave tell tale presents for me - but they don't normally trot about in the day time. This little chap was very bold and made no attempt to roll into a ball or scurry off when I went near to him.I put cat food down for him whilst I took his photo but he wasn't interested and he just carried on snuffling about in the autumn leaves. I keep putting food out in the evenings but I don't know whether Hedgy is eating it or if my two are just thinking it's an extra treat for them! 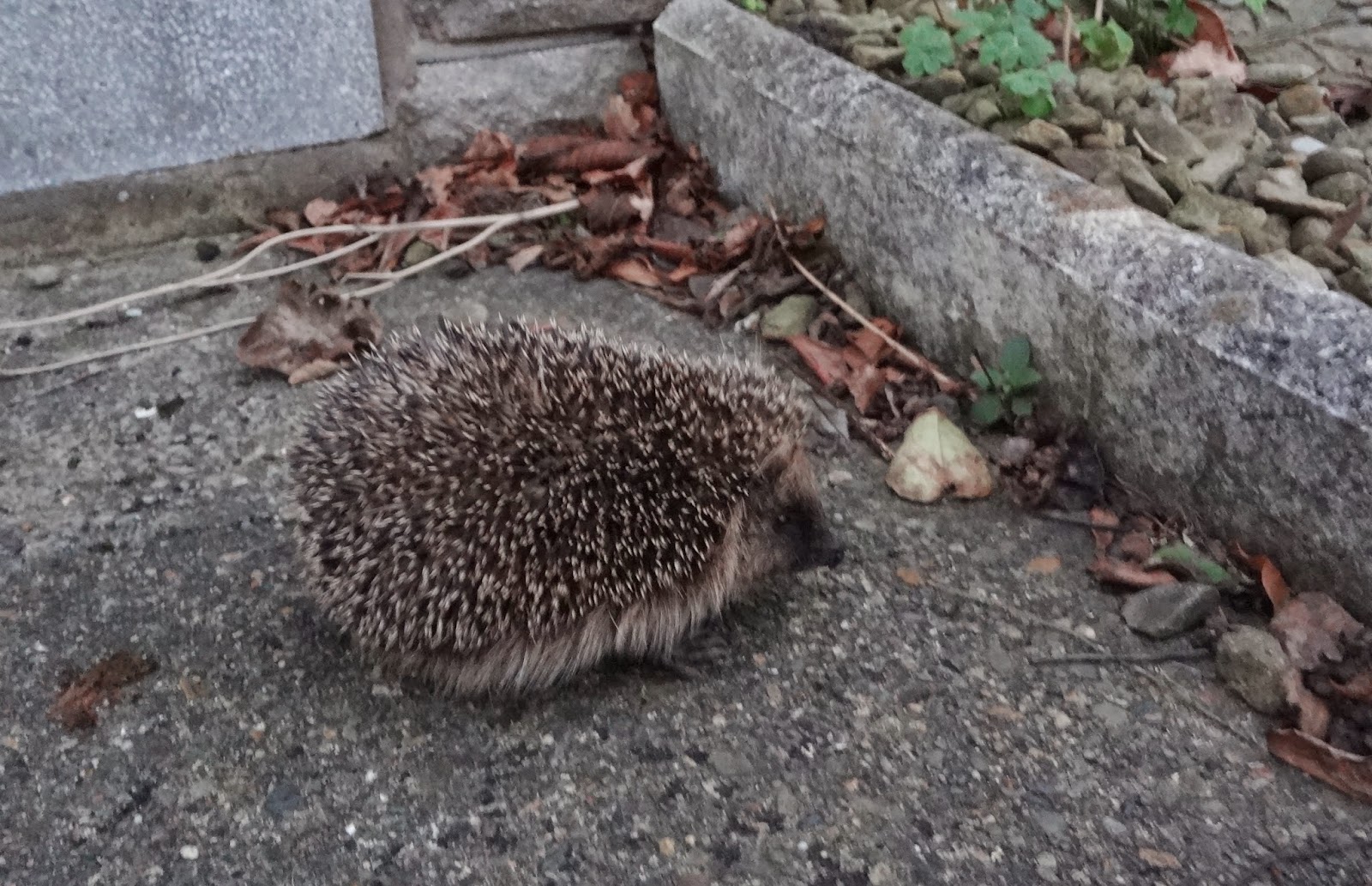 I'm trying not to put the central heating on too much, but it's getting too cold now not to give in! I'm always aware of the meter in the cupboard clocking up the pound signs as well as being concerned that the country doesn't run out of power as they very nearly did last winter apparently. It's tricky when I work at home though, especially working with my hands which just don't do what I want them to if they're cold! I trade off having the heat on in the day with turning it off when I stop work in the evening - then I snuggle on the sofa with socks and a cosy fleece. We really are having a very mild November so far though, certainly here in Lancashire.
Well, I'm going to take a look in the kitchen cupboards now and figure out what I can cobble together for dinner later on! Then it's sofa time with Thomas next to me and Tara on the footstool...well, at least they are getting nearer to each other bit by bit!
Posted by Lindsay Mason at 4:40 pm

Lovely picture of AB - he does always seem to be smiling! Sorry I won't be getting to any of these events - they all sound good! Your little hedgehog reminds me of when Snowy came across one and jumped back in horror when he went to sniff it as the prickles hit his nose! I used to find that tucking my trousers into my socks used to keep me warm in our old house(not an elegant look) don't need to here - we are sandwiched and sometimes too warm even with the heating off! Enjoy your week, Chrisx

Wow you have been been busy :) Let's hope all the hard work is rewarded, especially at the market. Know what you mean about the heating. There are only so many layers to put on before giving in lol. Pxx