Well, I just "upgraded" to the new posting editor from Blogger...then I immediately went back to the original one as it was just doing nothing except for the little spinning circle that whirrs round endlessly when something is obviously not up to speed. Any of you tried it yet, and if so, have you had any success - it's supposed to be easier to upload photos...mmmm!
As you will see from the title, I have some more new stamps out and they will be on QVC tomorrow - not sure what time, but there is a stamping hour at 12pm, so I'm guessing they may be on then...don't quote me though! If you'd like a sneaky peek at them (well, not that sneaky as they are on the QVC website!) the QVC item number is 590 197. Hope you like them as much as I enjoyed creating them. Unfortunately I haven't had any of the stamps myself yet, so I haven't made any of the card samples this time.
Well, it was another busy weekend and on Saturday I was back at Craftzone in Pontefract, home of Pontefract cakes (which are, dissappointingly, not cakes at all, but liquorice!!!) and Haribo sweets...Pontefract that is, not Craftzone! As you can see from David's photo, it was a very busy day with lots of ladies staying for several hours...chairs and front row seats were closely guarded. Lol. It was a fun day with a lot of laughter...I think there may have been a touch of hysteria too at the total amounts that some of the shopping baskets came to! Well, there are worse things to spend one's pennies on that's for sure! 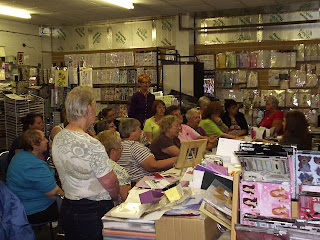 I promised that I would post a picture of this card which features a lovely winter village stamp from Personal Impressions (P241P). This is not the original, properly finished card, but one that I put together to remind the ladies who were at the last few demonstrations what it looked like. The stamp is the central image and I've simply inked the two large trees again to extend the width of the scene. I used Distress inks to create the background with water to create the bleached look. Again my camera has done a pretty shabby job of showing the image and colours at their best, never mind the tiny amount of fine glitter that I added. I'll have to start avoiding blues I think! Anyway, not exactly the best version of this card that I've made, but hope it's enough to remind everyone that was convinced they would forget what it looked like once they got home! 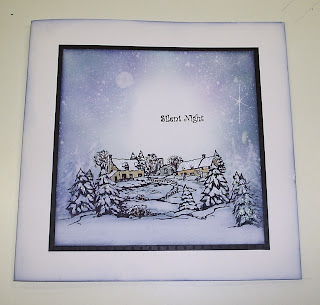 On Friday - I know, I'm time travelling here...we went over to mum and dad's. I was going to put a picture of my mum here, but post editor (or whatever you call it) is messing me about tonight, and it won't let me move anything around. Gggrr. Oh well, I will have to leave you with this snap of Tara, lounging about on the armchair...very different from the nervous little pusscat who arrived at mum and dad's from the cat rescue centre last year! 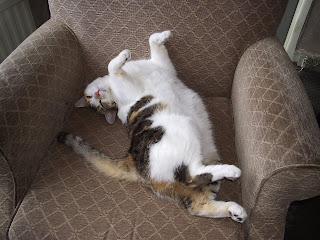 Sunday was a day just for David and I, for a change, but I'll be out and about next weekend at Crafts 4 U 2 Do in St Helens on Saturday and then at the the Crafty Workshop in Workington, Cumbria on Sunday. I'll be posting before then of course!

Posted by Lindsay Mason at 6:26 pm

Ponte. was a busy day for you, but I know how much fun those ladies had.
Hasn't Tara grown!
Luv Joanne xx

Ooooooh, love the new stamps.....they are all beautiful...can see the old staff account being hammered yet again..lol x