Back in the North

Hello all, after a week of being in and near London, I'm home again and looking forward to a few weeks being in the North of England and not so much travelling. Having said that, I had a really fabulous time last week! On Wednesday I travelled down to the Capital and had an hour or so people watching in the sunshine outside Euston station while I was waiting to meet Amy, whose train was delayed for an hour. It was quite good fun imagining where people were going, who they were waiting to meet and so on, and the time went by quickly until lovely Amy arrived and we set off for our hotel. I was bunking on the sofa in Dawn's room that night! We had a trip to Harrods but, with prices like £7.95 for a pomegranate, £5.50 for a cabbage and £3.50 for half a pound of butter, you may guess that I didn't buy anything! I haven't been there since I was a little girl so it all looked very different and quite magnificent of course, but definitely only for window shopping! We went for a delicious Italian meal and then headed back for a good night's sleep as we had some very busy days ahead.
Next morning we drove to the Queen Elizabeth conference centre in Westminster where the QVC customer event was being held. I was hosting one of the make n take tables whilst, this time, Kanban were hosting the workshops. Below are Dawn and the very popular QVC presenter, Craig, who welcomed everyone and outlined the day's events. Then it was all systems go and it didn't stop until almost 6pm! 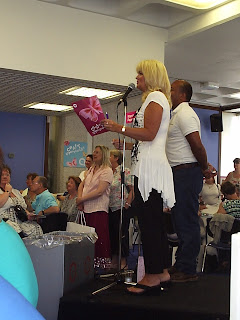 I was featuring my new Christmas clear stamp sets along with Distress ink pads...showing that you can combine whimsical with more distressy techniques. This is my table before we got started...looks pretty messy already! I had eight or nine people (not all ladies!) at my table per sessions and each lasted around half an hour with more people standing behind chairs waiting to come on the next sessions, so the the pressure was on both for me and those who were trying to finish their cards! Great fun though, but very tiring as you may imagine. 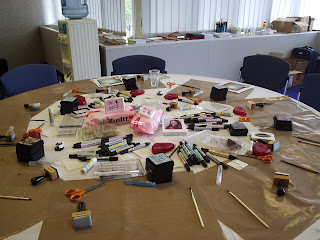 Here is the wall at the side of my table, showing some general card samples using my new stamps. 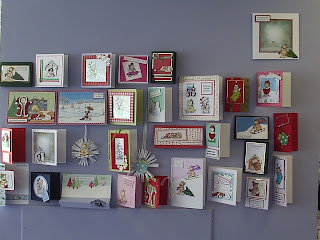 And here are just one, very cheerful group of ladies at my table. And there's my coffee and a biscuit which was one of three cups that I only took one sip of during the day! All the QVC customers who had come along were able to go around the tables and to the Kanban workshop, so there were things to make with the various companies and guests that are featured on the channel. My lovely friend Paula Pascual came along to see us all too - she had a great time as she was having a day off and a busman's holiday! There are some good pictures from the event on Paula's blog. 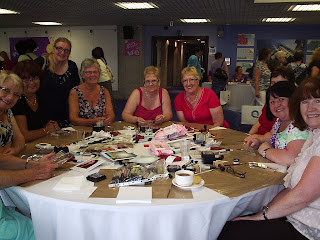 After the first day finished we left everything just as it was and I went with Kathy and Jayne, from Personal Impressions, back to Jayne's house for the night. We had a lovely Indian takeaway that was super delicious and a good night's sleep was had by all! Next day was a repeat of the previous one except that Anthony was there instead of Craig. He made one lady's day by giving her a huge hug and she turned to jelly! I did have more photos of the event, but my camera has managed to spit them out somehow! Hello to all the ladies and gents who attended the event and hope you all had as much fun as I did. On Friday evening I had to hot tail it to the station to get the train to Horley as I was demonstrating at Crafts U Love there the following day. I just caught the train and it then sat there not moving an inch until way past the departure time....a voice then announced that they were very sorry for the delay, but there was no driver! That's a new one on me! Scurrying to a new, packed, train then ensued and I got to Horley quite a bit later than I should have.
However, my mood lifted when I arrived at the hotel as this was one where I had previously stayed, and had problems...after three emails to them were ignored I was finally contacted by the manageress who urged me to stay there again, assuring me that I'd be looked after. Well, as you can see from the picture below, I was upgraded to a "presidential suite" - just me in this huuuge room with a triple sized bed! I went down for dinner and, after I had eaten and had gone to pay, I was told that there was no charge and that I could also have a complimentary breakfast. Just shows it pays to be persistent if you have had a problem! Only thing was, I didn't sleep particularly well as I felt very odd being in such an enormous room on my own and the heavy wood panelling and the drapes over the bed kept making me think of haunted houses! 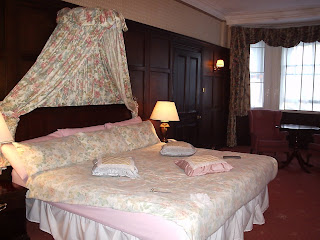 My day at Crafts U Love was less frenetic than the two previous days and it was nice to be able to take time with everyone to show the techniques I was using. I've lost all the photos from that day but I'll be making samples this week, so will add some pictures before the weekend.
I decided to avoid the underground for my journey home, knowing there were engineering works going on, and I've experienced them before....having to walk down out of order escalators with heavy baggage is not something I enjoy! However, it turned out to be a bad decision as my alternative route took me over seven hours! It was almost a disaster, as I was very nearly robbed of my suitcase containing all my stamps, inks, card, pens etc. Two middle aged men with bikes were on one of my trains and their body language made me a little suspicious of them - thank goodness. My case was in the train doorway, there being no luggage areas on this local train, but I could keep an eye on it if I stood up. So, at each stop, I made sure that I could still see my bag. The two bicycle guys were being quite twitchy, moving their bikes about a lot and engaging with people "sorry dear, sorry about the bike", "can you get past okay" etc, but their body language was giving out bad signals to me. When they came to get off I looked up and my bag was not in sight! I jumped up and rushed to the doorway, only to see them, with bikes and my case on the platform!!! One of them said "Oh sorry hen, is this your bag?" (unbelievable). "Yes, it is my bag, and even if it wasn't, it certainly isn't yours is it?" One of them handed me my case back, the train doors closed and we set off agin. Very frustrating as I couldn't do anything else about it and, typically, there was no guard on the train to report them to. I felt extremely fortunate as I was a split second from losing all my stuff...mind you, I could have almost enjoyed imagining their faces when they unzipped my very heavy bag and found it contained....card, inkpads, stamps etc!!!
Yesterday was just for relaxing and watching the men's Wimbledon final. It was a pretty disappointing match, over in just three sets, but there was some great tennis nonetheless and I know that Paula and I were both very happy to see Rafa Nadal reclaim the championship title. He's a great role model with his very humble attitude and the respect he shows to everyone. A worthy winner.
Today I have been remaking a magazine project because the original one which I sent, by Special Delivery, never arrived. Needless to say, I shall be filling in a complaint form for that one! I read so many comments on blogs about the poor Post Office service...think we all have problems with it sometimes.
Well, the 20,000 visitor mark has almost been reached, so, as promised, I shall be giving away some blog candy very soon. I shall gather everything together, take a photo and post details very soon, so watch this space! So, I hope everyone had a good weekend, and got chance to enjoy the sunshine. I'll be back with candy soon! Lindsay
Posted by Lindsay Mason at 7:52 pm

Wow Lindsay, what a trip. I worry about you travelling all over on trains so 'peg leg' and I will volunteer to drive you. Crafting on the go is a little dream of mine! Also, if your crafty stuff disappears, you will know at once who took it!!!!!!
Luv Joanne xx

Hi Lindsay - what a busy packed week you have had and it all sounds fun - but not the part where your bag almost got stolen. Thank you for keeping us updated on your crafting world. Yvonne x

glad you got back safely, thank goodness you didnt loose your case at least you can have a bit of a rest, i really enjoy your blog and it is so much nicer since i have met you in person at wickford the last time you was in essex, at the moment i am having at bit of battle with those horrible black midgey things. ginny

Just become a follower. Love all your work:)

I will try and link you on my Blog, am new to all this blogging, so bear with me.
Would love to be in for the candy.
I have a give away on my Blog too - K&Co Madeline collection.
love
michelle x