It's been a busy and interesting few days one way and another. Of course, Thursday was a real highlight with the Alfie Boe concert that Heather and I went to. It was a really fabulous evening with a mixture of popular songs from the sixties, some ballads, Neopolitan songs and some quite "rockie" music too. Alfie certainly showed off his wide repertoire as well as his energy....he was leaping around the stage and I'm sure he had springs in his legs!
He arrived on stage and shouted "I'm home!" which caused a great reaction from the Blackpool audience as he is a "local boy". His family, including mother and siblings were all in the theatre and he brought his nieces' little boy, Mikey, onto the stage where he sat on one of two big sofas with some lucky audience members. They were all serenaded by a traditional Italian song "A Vuchella"....which was one that David sang to me many times, so was one of the moments that had me welling up of course. There were quite a few other emotional moments, not least Bring Him Home from Les Mis which was a bit of a highlight for me.
There were lots of smiles too. He climbed down into the stalls to greet audience members, so, of course, those of us in the circle and gallery were a little envious. However, after a few minutes the spotlights started to focus upwards and suddenly Mr Boe popped up in the circle! 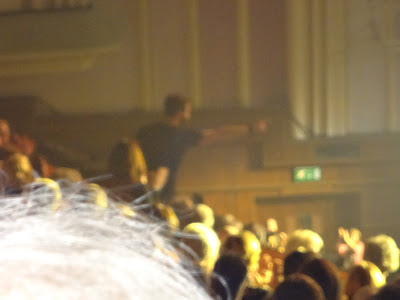 He then ran all the way up to the gallery, much to the delight of everyone up there in the gods, before running all the way back to the stage and carrying on singing as if he hadn't even broken into a stroll! A very special moment for all concerned and so lovely of him to say hello to the whole theatre like that.
Oh well, it was lovely and, as we were allowed to take photos I have lots of images (and a couple of sneaky little video clips!) to remind myself of the evening.
Of course, I was up early to catch my first train for the trip down to Thame. Thankfully the journey was pretty uneventful and I was met at my destination by Christina from A Maze of Memories, who dropped me off at my hotel right in the middle of the old market town. I was able to have a few hours strolling round Thame, which is a beautiful place and I made my way to St Mary's church to visit the grave of Robin Gibb... 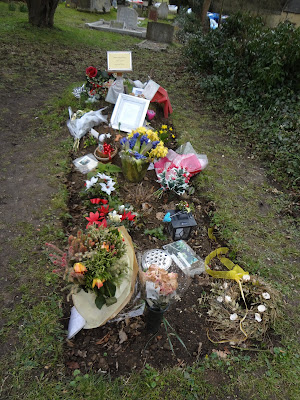 ...who lived in Thame. The grave is a very simple one and, as you can see, there are lots of tributes from people who loved his music. It's right on the edge of the graveyard, overlooking his home. He and David were going through their illnesses at the same time and Robin's funeral was on the same day as David's, so it almost felt like a pilgrimage to visit the grave. There are wind chimes in the branches above so there's a gentle musicality to the spot as well. Very moving, and a very humble grave for such a famous and talented man.
Next day of course, I was at A Maze of Memories where everything was laid out ready for a day of make n takes and demonstrations. I always enjoy my time there as the ladies who come along are really enthusiastic, friendly and welcoming. As usual there was a magnificent array of homemade cakes from Christina's daughter although the ladies were a bit too busy to eat much! 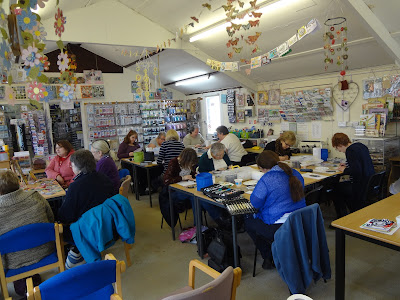 I was kept busy all day as well of course... 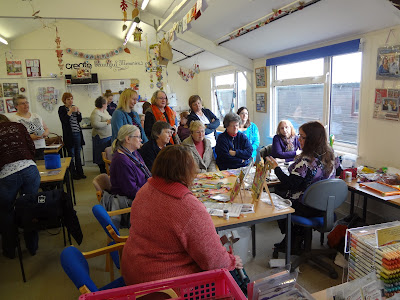 ......here's me cutting up some inky kitchen towels to stamp onto, which had everyone swearing never to throw them away ever again!.... 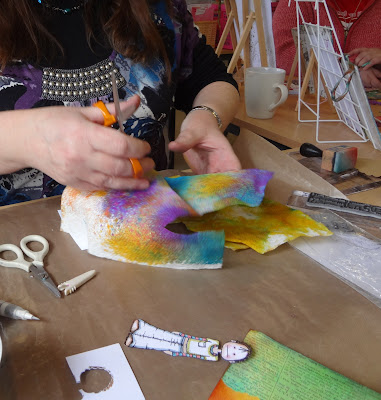 ....and going off the laughter and the full shopping baskets (!) I think everyone had a good time!
I must say a special thank you to Diane, who gave me a bag with pressies for Thomas and Tara...not just some treats chucked into a carrier bag mind you....oh no...look at these beautifully wrapped packages.... 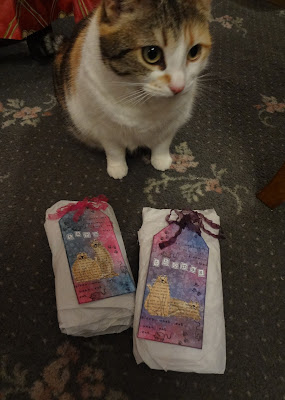 .....yes, individually stamped and decorated tags with their names on! Look at Tara's face...she can get anything off me when she makes that expression! They have now got their own toy and bag of treats each so, thank you again Diane from me and my two little pusscats. The treats helped me to get round Thomas too as, according to my neighbour, who pops in to look after them when I'm away, he didn't sulk, he went into "meltdown" and refused to eat! Oh dear. Well, he's okay again now I'm pleased to say. Tara doesn't sulk as long as someone is feeding her! Oh, and they weren't the only ones with treats by the way - I was given a huuuge box of choccies by Christina before I left. I'm sharing them around with everyone though, so am being very good!
Yesterday was a rainy day but so mild after the rotten cold weather of late. It was a bit too wet to garden, but I did some general tidying and even managed to cook a Red Thai curry.....no...it's no good...I can't lie....I cooked the chicken and added a Lloyd Grossman sauce!
Today has been  really warm and sunny here, just lovely. I was, however, working - in my Doo Lally room which is on the cold side of the house. I was up early, so I was drawing by 6.30am! I did what I needed to get done and then sat on the conservatory steps at the back of the house for a while to warm up again. I was lost in contemplation for quite a while and then roused myself to change into my old clothes and spend a few hours in the garden. I've planted about eighty summer bulbs. I was horrified to read on the enclosed literature that they should be dug up and stored over winter....what?!? However, on Saturday, one of the ladies (I'm so sorry but I don't have your name) told me that if I put a layer of gravel in the holes and put the bulbs on top of that then I can get away with leaving them in - hooray! So, they will take their chances I'm afraid. I've also cleaned up all the wall containers and transplanted my Nasturtium seedlings into them as well as putting the remaining ones around the garden generally. It's all looking much tidier and the little Violas I planted out have almost doubled in size since last week. Every day there seems to be a new tulip or narcissus opening out, so it's a promising start to this late arriving spring.
After a shower I changed into my PJ's (at five o'clock, I ask you!) and came back into the Doo Lally room to ink up the sketches I'd been working on earlier. So, it's been a busy and productive day one way and another. I think it's going to be much wetter tomorrow so I will be getting on with those drawings I guess!
Oh, by the way, the Barn Owl has been flying over the fields at all sorts of times of day and night, so my neighbour and I think it must have chicks with the amount of swooping down for mice that it's doing. The naughty seagulls (massive ones) have been very naughtily dive bombing the owl though...they are after her catches of course. It's marvellous to watch but I haven't been able to get a photo - yet. Will keep trying though!
Posted by Lindsay Mason at 7:53 pm

Labels: A Maze of Memories, garden, Thomas and Tara

Cor Blimey what a busy life you're having! So pleased that Alfie Boe was as good as you hoped & better. Sounds like a perfect night out. Love the pressies your felines received. They are beautifully presented. What spoilt kitties lol. It's warming up here too. I actually saw cowslips coming through on y walk by the river today. Good to see you're being sensible with the chocs. Can you believe I haven't touched sweets for two weeks now! A personal best! Take care my friend & enjoy the rest of the week. Pxxxx

Glad you enjoyed your weekend! Still sooo jealous of you seeing AB! Sounds like a really good night! We've been roped in for a spot of gardening here - or rather, at the moment clearing a load of ivy - tough going!! Off to cara soon for a rest (and more gardening)!!! Love those kitty bags!! Chrisxx

Was great to see you again Lindsey, really enjoyed all the samples and the inspiration you brought to us all at A Maze of Memories on Saturday. Thank you, look forward to a return visit :)

Thanks Lindsay for a fantastic day of inspiration and fun at A Maze of Memories on Saturday. Everyone has been madly inking and spraying with their Do Lally Pip characters in the craft room today! It will be great to see you again in the Autumn.
Christina xx A Maze of Memories

Linsay it was great fun on Saturday !! You are a lovely person and fab designer !! I wish I could of stayed all day just to watch you work. Still got my piece of kitchen roll to play with !! So glad Tara and Thomas liked their prezzies and its nice to know they missed you !!