Yes, I have managed to capture the Barn Owl on film! I saw him gliding around at 7.45 this evening and I rushed in to get my camera. He wasn't at all bothered by my presence, or that of Thomas and Tara. I have some less fuzzy shots from a distance, but I thought I'd post this one that's a little blurred at the edges but really shows him up well..... 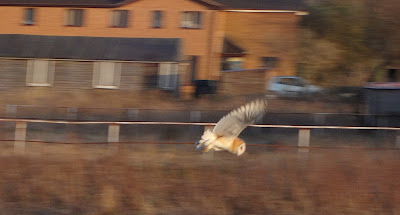 .....isn't he beautiful! What a wonderful sight to be able to see just by looking from the back of the house. He is living in the barn that belongs to the house you can see in the background.....I've concluded that "she" is probably a "he" after all as I've been checking a few facts and, even if a pair have nested by now, it will be the male who is mostly out hunting, taking food back to his mate...partly to persuade her to let him have his way with her! If there are eggs, or even owlets, then it will be the male who is out and about, leaving his mate to look after the family.
He's doing a grand job anyway, diving down frequently to catch mice, voles and shrews which all live in the field at the back of the house. I have seen him in the morning, in the evening and even in the middle of the day.
I've uploaded the video that I managed to film of him to my You Tube site (click the link in my left sidebar) if you'd like to see him in action!
Posted by Lindsay Mason at 8:09 pm

Nature at its best Lindsay !! Fantastic !! Really had a laugh with Tara chasing light !!

Wow, how wonderful to see him. We have a pair of tawny owls in the field next to us. We hear them a lot at night but we've never seen them x

Hi Lindsay, Thank you for showing us the beautiful barn owl what a lovely sight he is. I hope you see little owlets soon. Hugs Mo x

He is gorgeous! How lucky are you to have such fab wildlife outside ?! The best i have is a couple of cows lol
Off to watch the video now, thanks for sharing :)
Fiona L x