It's all in the expression

Another morning post from me, although, according to blogger, my ramblings are never written at the time that I actually sit down to type them for some reason. Must be a different time zone at work. Anyway, it's actually just before 9.30am!
I had a really lovely day at Crabapple Crafts on Saturday. It took me an age to get there, even though it's not that far...I had around three quarters of an hour to wait at Warrington station for my last connection, but at least the coffee bar was open which made it bearable...didn't much like the 6am start to the day though! I met up with Esther Gundry on the platform as she was also demonstrating at the shop and we travelled the last few miles to Frodsham together. Nigel met us at the station and we soon knew he was in mischief mode....and look what he did to one of my photo cards when I nipped to the loo! 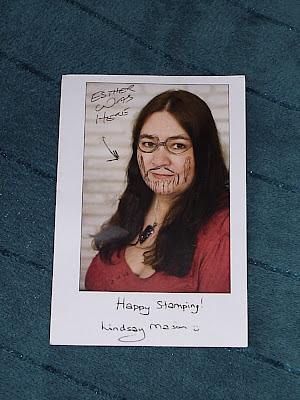 Blamed Esther too.....how rude! Lol! (Told you I'd tell on you Nigel!) It was a busy day and great to meet up with lots of friendly and familiar faces again. I was demonstrating with Gorjuss stamps again, as well as some of Andy Skinner's sets. This card features one of his "Word Up" stamps as well as the grasses from his Easter set, alongside the "Little Foxes" clear Gorjuss set. The card itself is just folded from a piece of MME Kraft Funday which I've smudged some Dusty Concorde and Faded Jeans Distress ink onto. Just my colours! 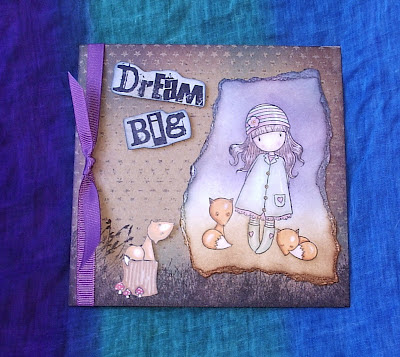 I was featuring the Glue n Seal technique again and, as promised to the ladies that were there on Saturday, here is the picture of one example that shows how it can go wrong if you don't make sure you cover the whole image with the seal! Poor girl ended up with a 5 o'clock shadow and I couldn't help but add a thought bubble! 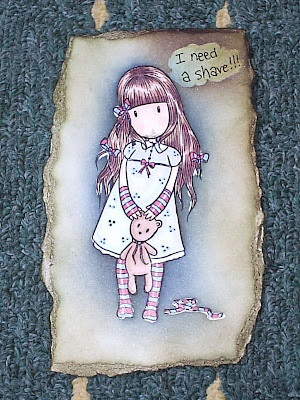 Again, by the way, that was just hand written and then I swiped Glue n Seal over with my finger before drying and layering on more ink colour. It's good to have some fun on demo days! I was given a fab ATC by Sonia - very cleverly put together to form this serene image. When I got home, there was a lovely card waiting for me from Redanne, who won my recent blog candy - love the air balloon with the honeycomb paper, and it was fun having a card with an instruction to peel up the DST and fold the paper back to create the 3d effect - brilliant! Thank you both, ladies, much appreciated. 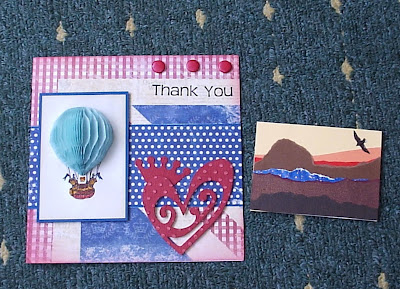 Finally, as also promised on Saturday, here is a sample of how you can alter the look of a single Gorjuss character with just a few lines drawn with a fine pen...

....I know some people dislike the "no face" style, but it only takes a few seconds to change that. It's a bonus too, because rather than being stuck with one expression, the lack of faces means that you can use the same image for lots of occasions. So, from left to right we have the cute smile for a happy card, the sad face for a get well card, the wavy mouth that could suit a "sorry" card, the surprised face that could say "you're how old?!", the cross face (note the eyebrows)...well, choose your own card occasion for that one. Lastly, just a different smile that's not quite as wide as the first one. You really can give an image a myriad of expressions!
Well, I must dash as Heather is about to call round so I had better be ready!
Posted by Lindsay Mason at 9:18 am

Sounds like a fun day! Love the way you can change those faces! Better get on or I'll need the sorry expression a few times! Should be making cards but been playing in my journal lol! Hugs, Chrisx

Oh No Naughty Nigel, Love the facial expressions on your Gorjuss girls, they are brilliant, Love Hazelxox

Oh I did laugh at the 'shaving' bubble - and yes Nigel was naughty. Glad you liked the card Lindsay.

I was wondering why all your emails were written at 2am haha!
Fab day Lindsay! As I'm one of those people who finds GG weird without a face I decided to draw one! However the pen I used was too thick and unfortunately she ended up weirder than ever!! It has been rectified - thanks again for all your tips xx