The days are fluttering by in more ways than one here....can any of us really comprehend that it is September? How did that happen? And there seems to have been a resurgence of butterflies....Large Whites, Peacocks, Painted Ladies....all are flitting about my garden once again attracted by the late flowering nasturtiums and the lavender. I was working in my Doo Lally room yesterday when a butterfly of a species that I hadn't seen before danced into the room. It really did appear to be dancing...skitting about by the windows and tipping its wings in a very dainty fashion. I managed to get a few photos in the moments when it settled......... 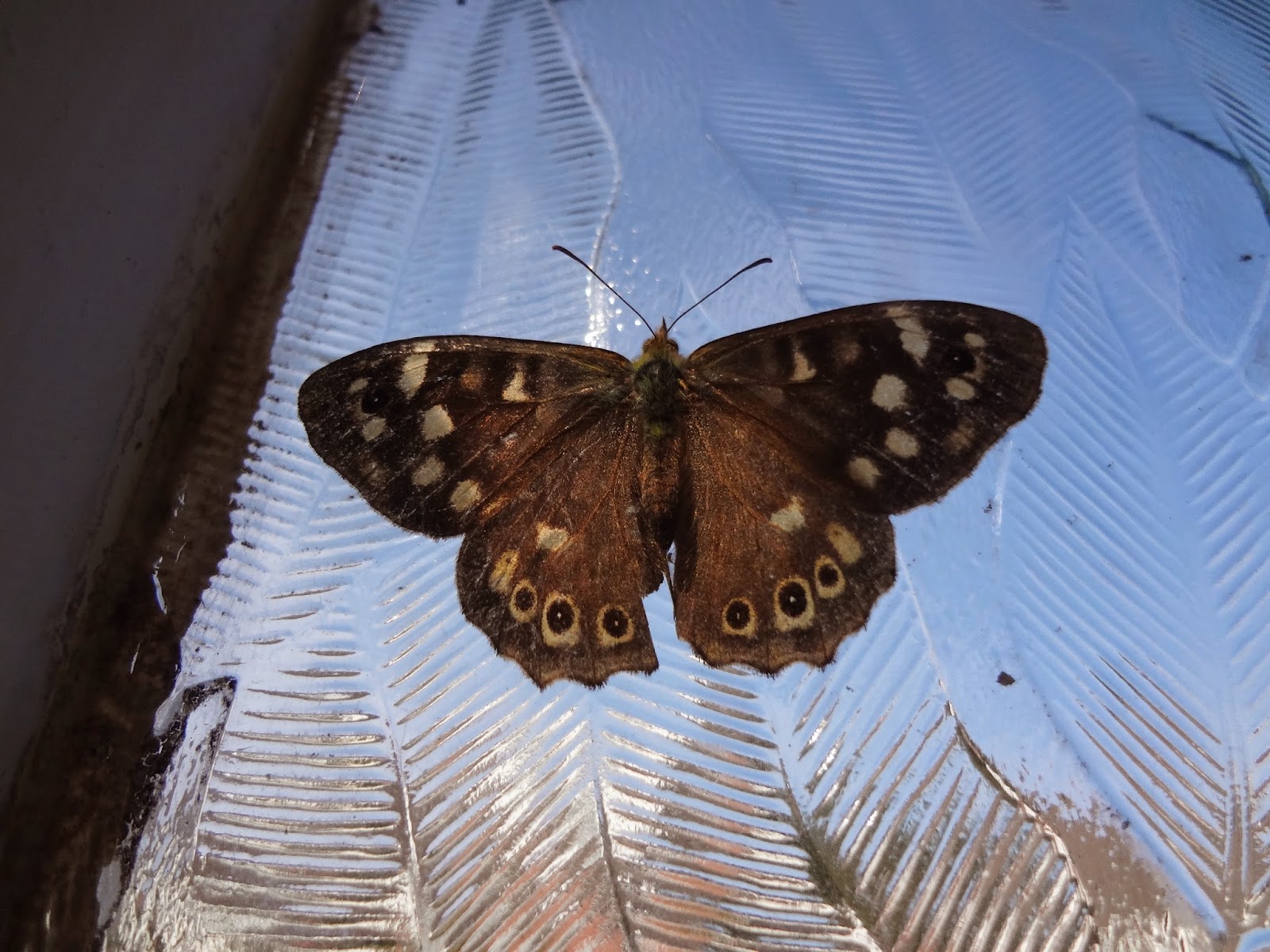 .....this made it much easier to identify it from my insect book later. The photo doesn't do it justice as it looked much prettier and the colours were certainly brighter than they look here. It turns out to be a Speckled Wood butterfly of the Satyrid family and it may well have been dancing, in a rather soporific fashion, as they apparently have a penchant for imbibing the juice from over ripe blackberries - of which there are many along the edge of my fence!
Yesterday evening I got the binoculars out so I could watch a Kestrel that was perched on a fence post in the field behind the house. He was being bombarded by brave little birds that were trying their utmost to get him to scoot but he was completely ignoring them and staying put!
I hope you're having the same fabulous weather as here in Lancashire. The sun has been beaming down through hazy skies with not a breath of wind - just lovely. It makes it all the more of a shock when it starts to go dark so much earlier now - oh to have more of the long evenings!
Looking at my "this day last year" photos for today, it seems that it wasn't quite as lovely as there are pictures of a very foggy morning and wet grass! I did like this photo though and I can remember going around the garden that morning and seeing lots of spider webs glistening from the morning mist.... 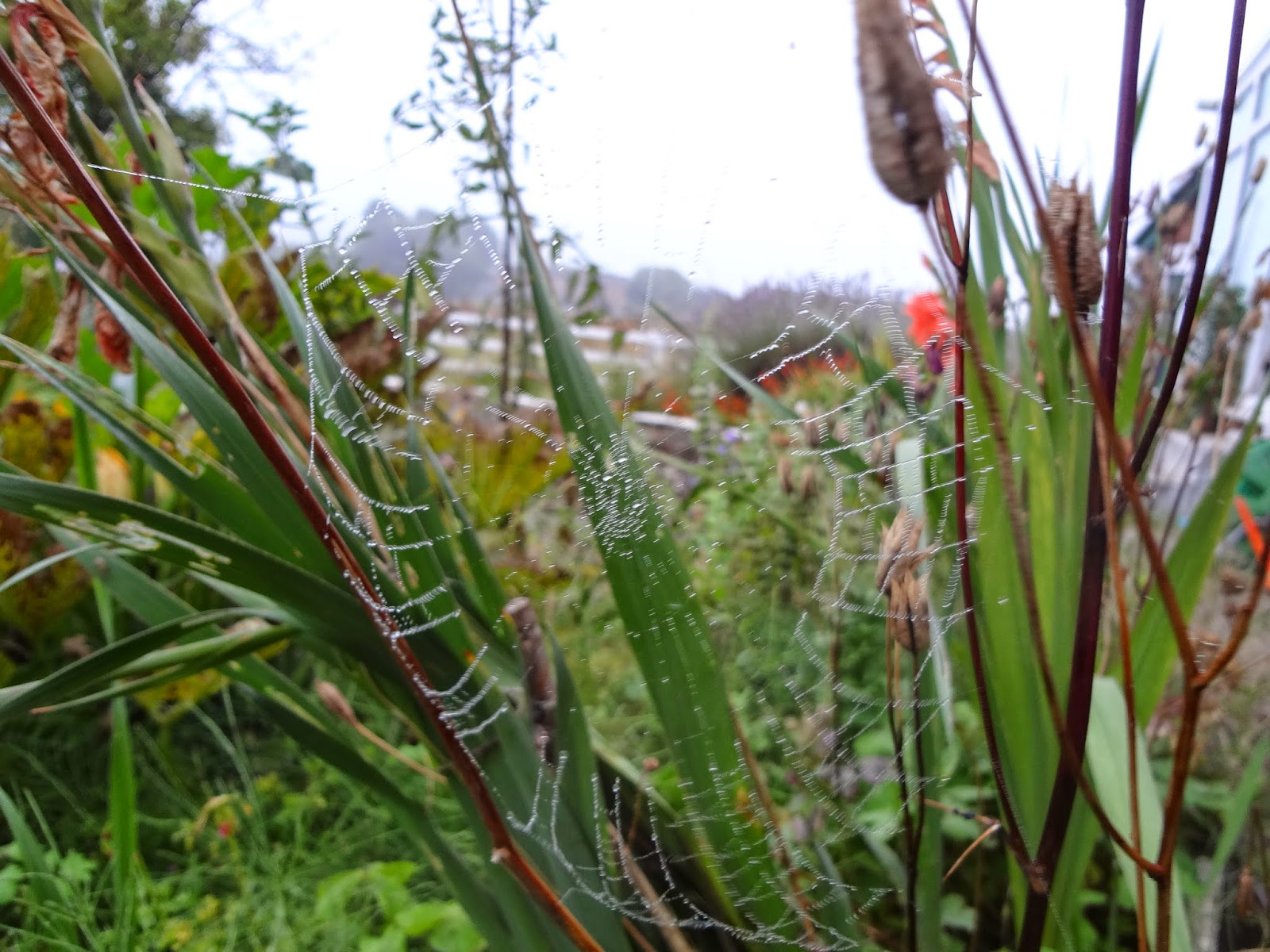 In between all this "country diary of an Edwardian lady" stuff I have been doing some work too - honestly! As I have a couple of weeks without doing demonstrations I've still been busy making things for my Etsy shop and the stall that I'll be having in December. I'm looking forward to that as I'll be part of the Christmas Festival market which we have in Poulton square and part of which is the lighting of the nativity crib with carol singing followed by coffee and mince pies in Church. I'll miss out on the refreshments this time as I'll be manning my stall out in the (probably) very cold weather!
Here's a large canvas that I created this week...... 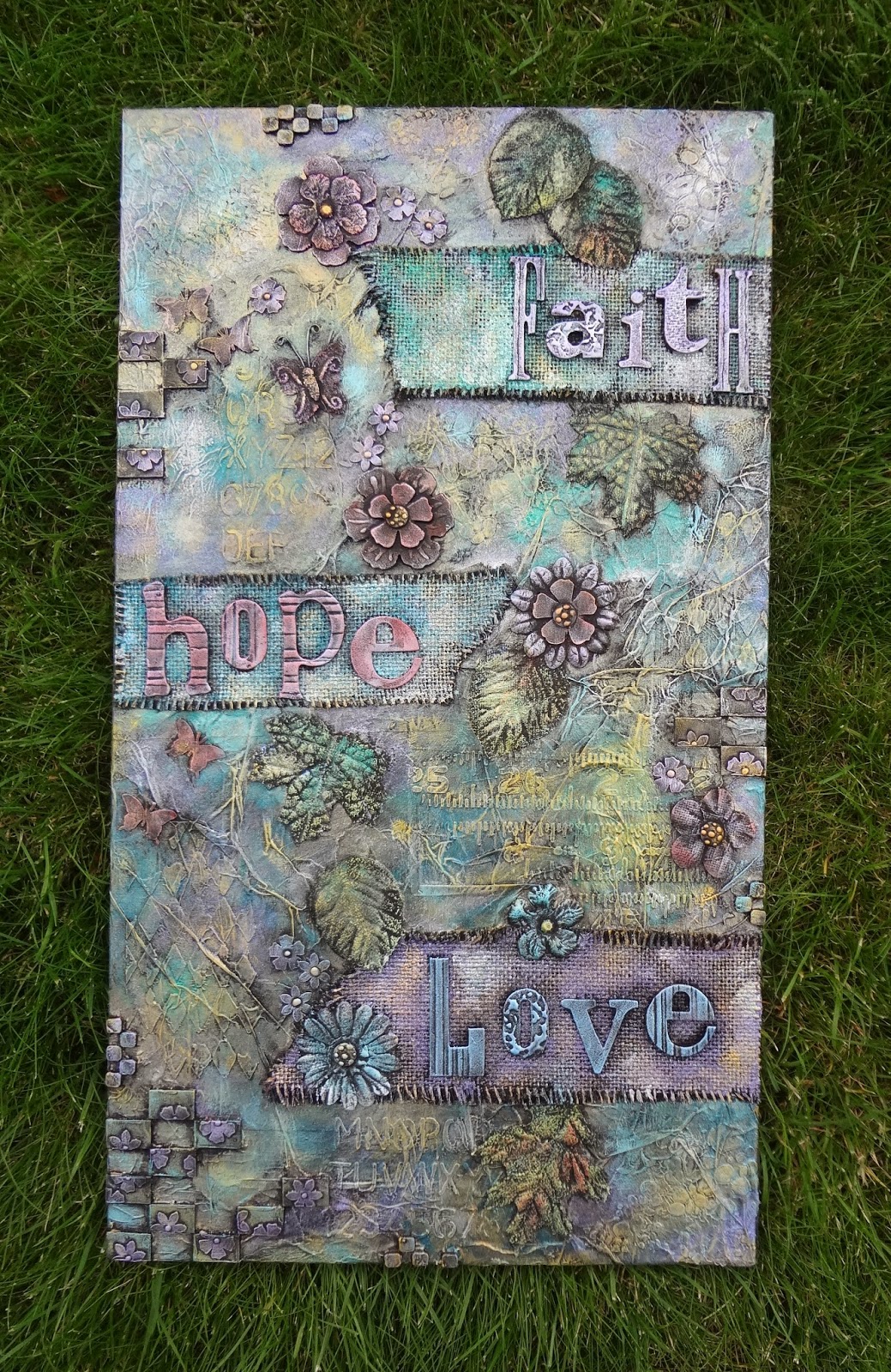 ....one of several that are adorning my walls at the moment like an ever changing gallery! I have a long list of things to be made for my December stall.....cards, bookmarks, canvasses, paintings.....anyone know where I can buy a few extra hours in each day?!? Thankfully I do like getting up before 6am when the light is decent, so I have been making a head start!
Tara likes to keep an eye on what I'm doing when I get the camera out - she's looking at the soil that I managed to knock out of one of the tomato plant tubs here though I think! 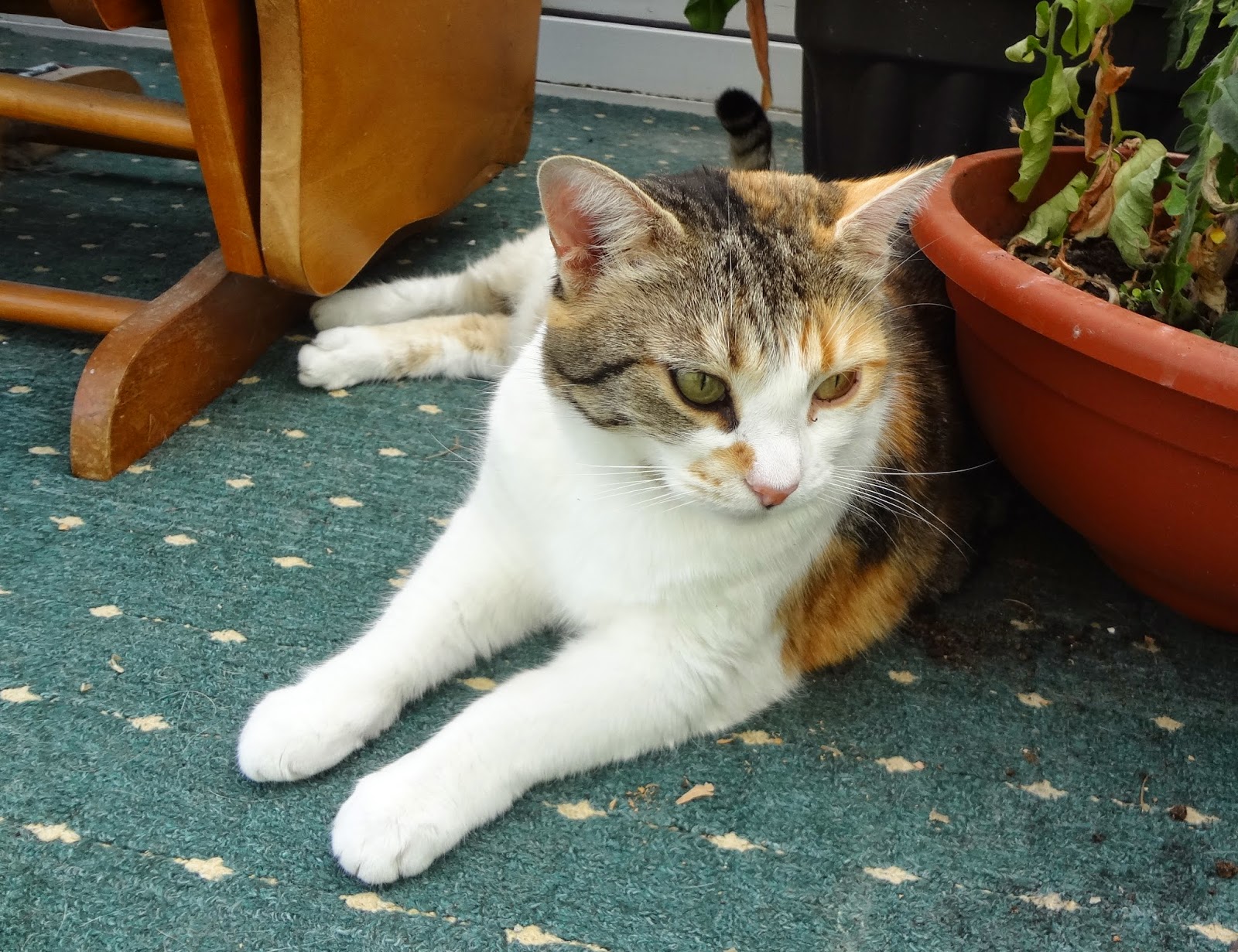 Yesterday was not a good one regarding the pusscats in my household! In the morning I was stroking Tara when she suddenly decided to sink her teeth into my hand - she's not done this for a while and there was no apparent reason for it this time. Of course, she had to be told off so I told her she was "a very bad girl" and  tapped her bottom as she scooted off - and when I say tapped, I do mean the gentlest of chastising taps. Of course, being the softie that I am, I very quickly went to find her so we could be friends again. She was on the window sill in the bedroom and when I drew back the curtain she cowered away from me....you can imagine how terrible I felt. Tara was a rescue cat when mum and dad got her and she's always been grumpy and nervous of people so who knows what has happened in her past....certainly  my raised voice yesterday brought it rushing back.
Needless to say that she had extra fuss made of her (including some treats of the fresh ham variety!) and  was soon perfectly okay again. I felt like the worst person in the world though - even though she had bitten me very hard!
In the evening I heard my neighbour across the road calling my name and I went out to discover that Thomas was in her garden growling menacingly at my neighbour's cat, Smokey, who is not only very elderly, but is the tiniest adult cat you could imagine. As soon as I tried to pick Thomas up he launched at poor little Smokey and it was like a whirling ball of cats until we managed to separate them! Poor little Smokey shot into the house and Tom sauntered off looking twice as big as normal with every hair on end - and he's about the size of a fully grown lion as it is! Lol! Talk about showing me up! I was very ashamed of him, especially as Smokey is female!
So, lots of feline stress one way or another. Thankfully they are both behaving themselves today - so far anyway!
Well, this has been a bit of a rambly post but I just wanted to sign in and say hello really. I hope everyone has a really great weekend. I'm having one of my rare treats of a Friday evening where I can really relax knowing that I don't have to up at daft o'clock to catch a train to who knows where! Lovely!
Posted by Lindsay Mason at 5:39 pm

"I hope you're having the same fabulous weather as here in Lancashire." How glad I am to read this, Lindsay, for we are about to spend ten days in your county! I'll verify our findings in time. Meanwhile, I hope you'll enjoy both the garden and your Doo Lally room!

How wonderful to have all that nature around you :) It's a real treat when you spot something in your own garden :) I know how you feel about being upset over the naughty felines. We had to take ours to the vets three days in a row for a set of injections and it took a week before he would trust us again to come near him lol. Pxx