A time to work and a time to relax

Hello all. I thought it was about time for a catch up as my last post was over a week ago. It's been lovely having some time off, spent at home but there's no place I'd rather be. Thomas and Tara have been very relaxed too. I guess they sensed I wasn't going trolleying off for a day or two! I think the key to relaxing is to be able to do nothing (or something other than work) without feeling guilty about it. After the pressure to get my new Christmas stamp designs finished I really needed to forget about everything to do with work for a bit.
So, not a lot of creative things to share tonight! Instead, the "holiday" has been made up of all sorts of non crafty things. Last Monday I met my sister, Heather, in town and we had lunch and did some window shopping. I had to return some very pretty shoes....I had only worn them to stroll into the village and the soles fell off! Just my luck!
Tuesday was spent doing some weeding in the garden (where else?!?) and trying out my brilliant purchase from the previous day. It cost all of 99p from Wilkinsons and was a spray trigger attachment for my hose pipe. Whoopie Doo you may say but I have had so much fun trying out all the different settings! Much less wasteful of water too. I did some repair work on the wooden window frames on the outside of the house too, getting the rotten wood out and replacing it with filler. Much more to be done on this front! I spotted two little chrysalises on the window shutters so  I keep checking to make sure they are still safely attached. I think they are Cabbage White's....the ones that have been munching on my Nasturtiums but hey ho!
Wednesday was the day I actually finished reading Life of Pi...it's only taken me about eighteen months on and off!  In the afternoon I headed off to Church to help with a funeral, handing out service sheets, greeting mourners and then helping to tidy the Church afterwards.  It was a particularly sad event and left all of us feeling pretty grim really.
In the evening it was off to the Vicarage for part two of our study course based around Les Miserables. It's proving to be a very interesting course leading to lots of debate. It's good to take one's introspective thoughts and share them with others.
I managed to squeeze in some tennis watching during the week of course, though not as much as I normally do as I didn't want to waste the glorious weather. On Thursday night I watched the film of Life of Pi which I enjoyed enormously and can highly recommend. It's visually stunning, surreal and very thought provoking. Some of my friends and I have decided that we enjoyed watching Les Mis together so much that it would be good to have a film night once in a while, so Life of Pi is going to be our first one. Yes, I know I've just watched it but I need to see film on my own first....I like the peace and quiet so I can concentrate!
Friday was billed as the hottest day of the year so far. It probably was in the south, and especially at Wimbledon, but here on the Fylde coast the Heavens opened and the rain just kept coming. It was definitely a day for staying inside and watching the tennis. Thomas and Tara got very grumpy and agitated at not being able to go out!
On Saturday Heather and I went to visit mum and then called in at the fete that was being held at the neighbouring village Church (part of the same parish as St Chads). It's a pretty small event but it was packed with people enjoying themselves. I won two prizes from my five tombola tickets - a bottle of lager with strawberry flavour and a bottle of non alcohlic wine - both still in the fridge! Later on Heather got a phone call to say she'd won one of the raffle prizes - a nice selection of Champneys Spa products. Must have been our lucky day!
Sunday was Church again of course and I was on duty which I always enjoy. I had to announce the hymns during communion as part of my tasks and I always have to crane up on tiptoes to make sure my voice reaches the microphone on the lecturn! As usual there was coffee after the service and then I scurried home to watch the men's tennis final. I'll admit that I rarely bother watching the ladies final as it's usually a bit of a non event in my opinion - this year's lasted less than an hour! The Federer/Djokovic match was a real nail biter though and thoroughy enjoyable. To think it was a year since this.... 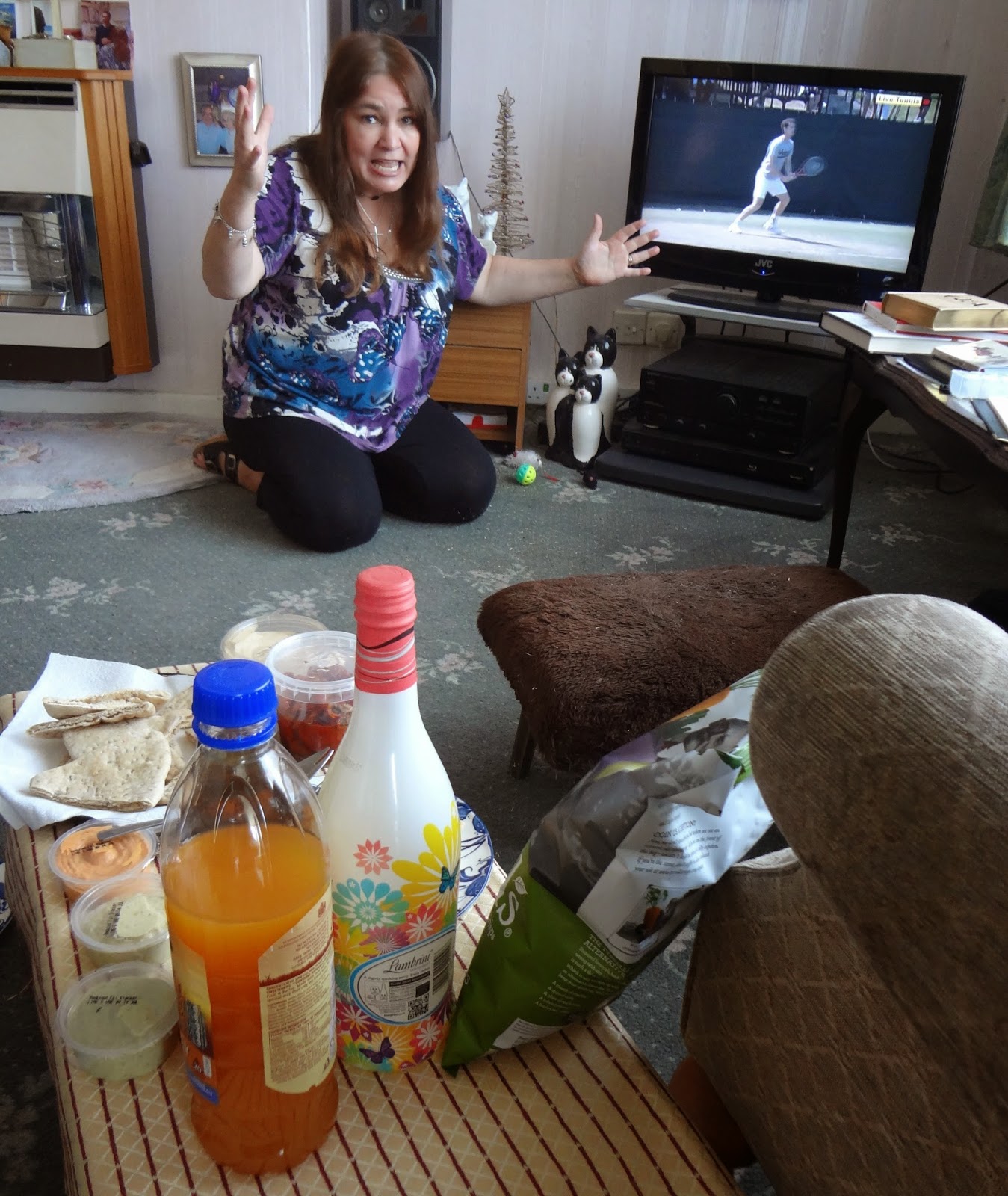 ...Heather and I had a lot of fun that afternoon watching Andy Murray win!
On Sunday night I was letting the two terrors in at the back door when I heard a very loud fluttering inside the conservatory. This was the source of the sounds.... 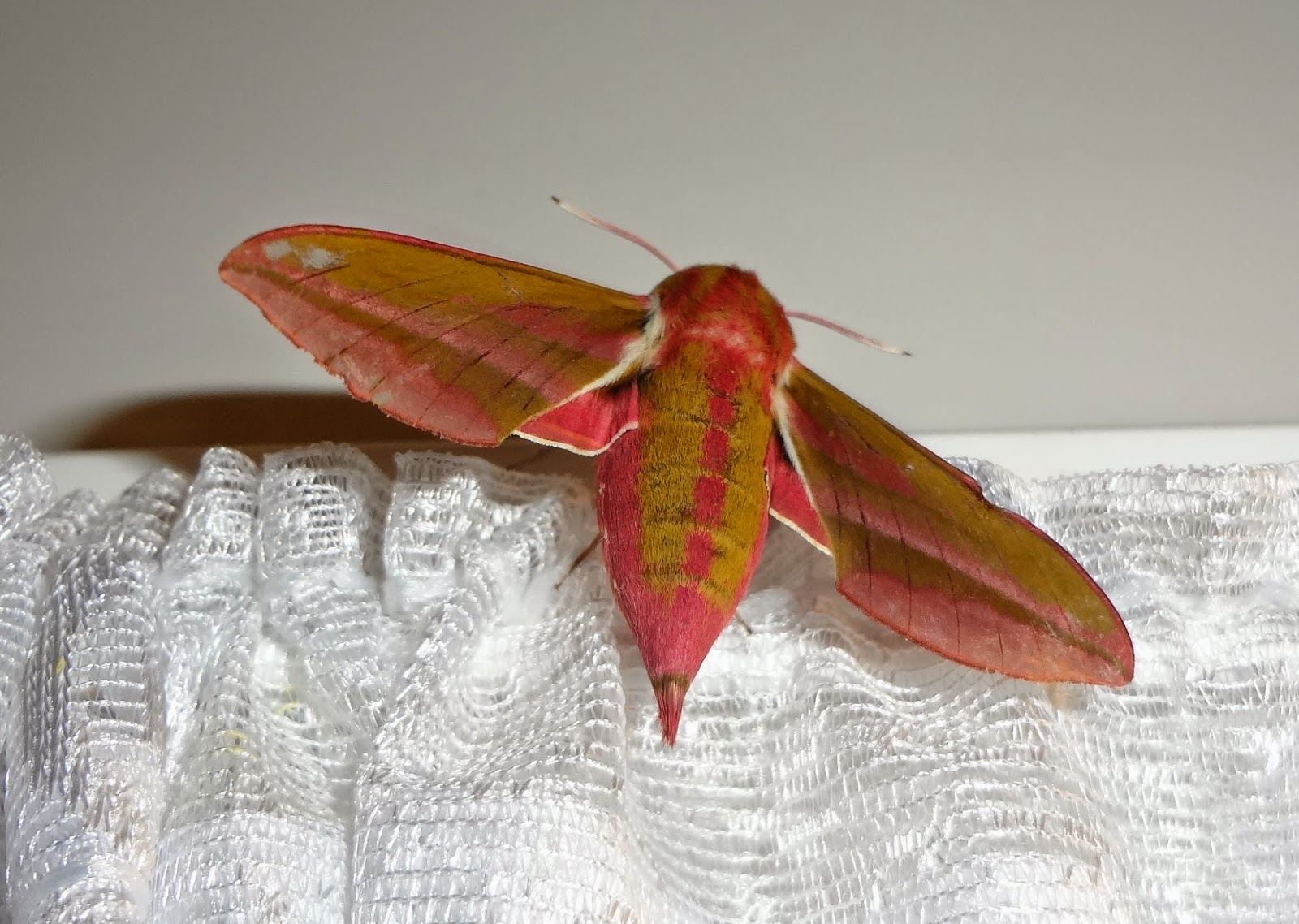 ...a beautiful Elephant Hawk Moth. He was huge! You can get an idea of the size in this picture, when he landed on me..... 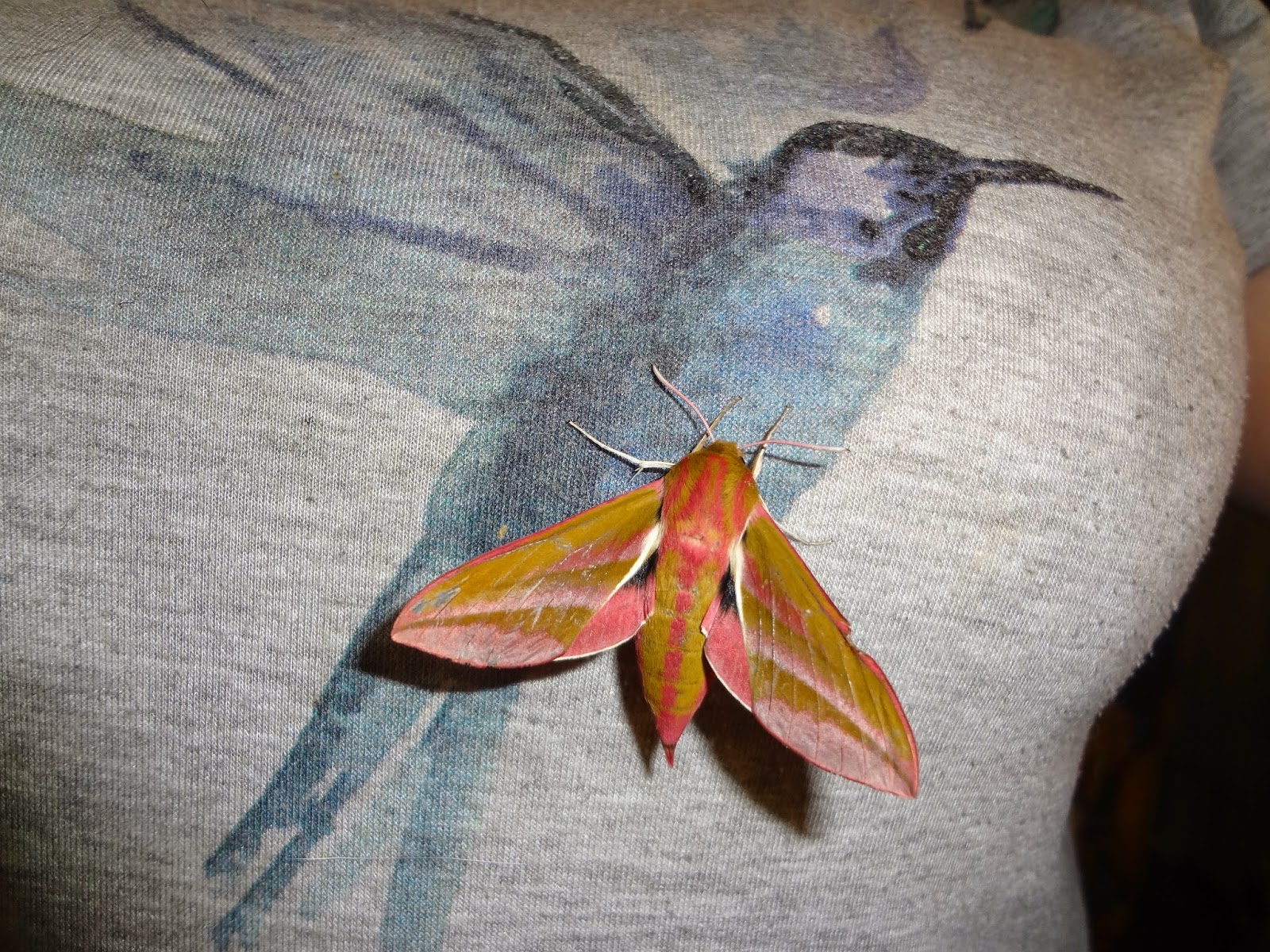 ...mmm....yes....well! I managed to pick him up to get him outside and he felt really strong inside my two hands. I'd have loved to have seen him as a caterpillar as they look really extraordinary. More wildlife reports this evening as I saw a kestrel hovering over the fields at the back of the house - what a treat.
The last few days have been more of the same really....gardening, reading, doing a jig saw (that always feels very decadent!), watching the odd film, having forty winks on the lawn....lovely! I also grabbed a few bargains in the local charity shops, including a gorgeous appliqued white jacket from Quacker Factory that was an absolute snip!
This morning I had my temporary crown removed and my new, permanent one put in.....well, I really  hope it's permanent anyway! Just one more crown to sort out now and then I should be finished with dental appointments - hoorah!
Thank you for the kind comments and emails from everyone regarding both new stamp designs and my decision to knock my other blog on the head and post all my ramblings on just this one - it seems that some of you do enjoy reading my waffle!
Well, I'd better get ready for bo bo's now. I'm looking forward to a good night's sleep with fresh linen on the bed - lovely, what a simple pleasure! I'm still betwixt and between things just now - waiting for my new stamps to arrive so a few more days off still on the cards for me. I'll be posting details next time about where I'm going to be over the coming weeks. Sorry for waffling on! Night all.
Posted by Lindsay Mason at 11:40 pm

Ooooh! and here's me thinking I'm up late - can't sleep with a football commentary going on in the other room!! Loved reading about the garden and the wildlife! Glad you are getting a bit of a break! Love reading your posts - always something to make me smile! Chrisxx

Funnily enough a friend posted a picture of an identical moth on her Facebook page, wondering what on earth it was!
Sounds like you had a lovely week - always good recharging the batteries :) x

Sounds like you've had a perfect break. You'll have to find another book to plough through now - I'd recommend Gone Girl :) We've seen one of those moths this year too. Must be the weather bringing them all out. And yes, I love your ramblings so keep posting them lol Pxx

Love your waffle! ;)
That's a big moth....never seen one of those!
xoxo Sioux

I too enjoy reading your blog. Thank you.