Just waiting for Heather to arrive and then we're off to visit our mum, so I thought I'd take the chance to add a short post in the meantime. I think we'll be calling at the garden centre on the way back so I can get some more (even more) compost....where does it all go? I have lots of things waiting to be planted out and potted on....Rainbow Chard, Courgettes and Sweetcorn plus tomatoes and quite a few flower seedlings. I'd like to get some of them done later today before my trip tomorrow.
Yesterday was so hot here that I had to water everything in the conservatory several times throughout the day and, as I was working in there, I felt quite faint and wilted myself by the afternoon! Last night I went to a special service at a Church in a neighbouring parish where the new Bishop was visiting to officially welcome and instate the wardens from the various churches in the area. It was a really lovely and uplifting evening and the organist was playing in a very uptempo way that made that made us all think we were listening to a Wurlitzer! Really jolly! I'm not a warden but I've just been made a member of the PCC (Parochial Church Council) so we were all welcomed as well. I'll be attending my first PCC meeting tonight, so it will be very interesting!
Anyway, the last couple of days have been spent in getting more samples made and prepping things for a short workshop that I'll be doing on Saturday.
Here's one of the cards I made yesterday, using my Zendoodles ready to go Mushrooms stamp set and one of the owls from the Owl Buddies set - this set features two owls on branches but no reason not to separate them! I kept all the colours in brown tones and a simple layout which I think makes it ideal to send to a man. The greeting is from one of Paula Pascual's sentiments sets - very useful! 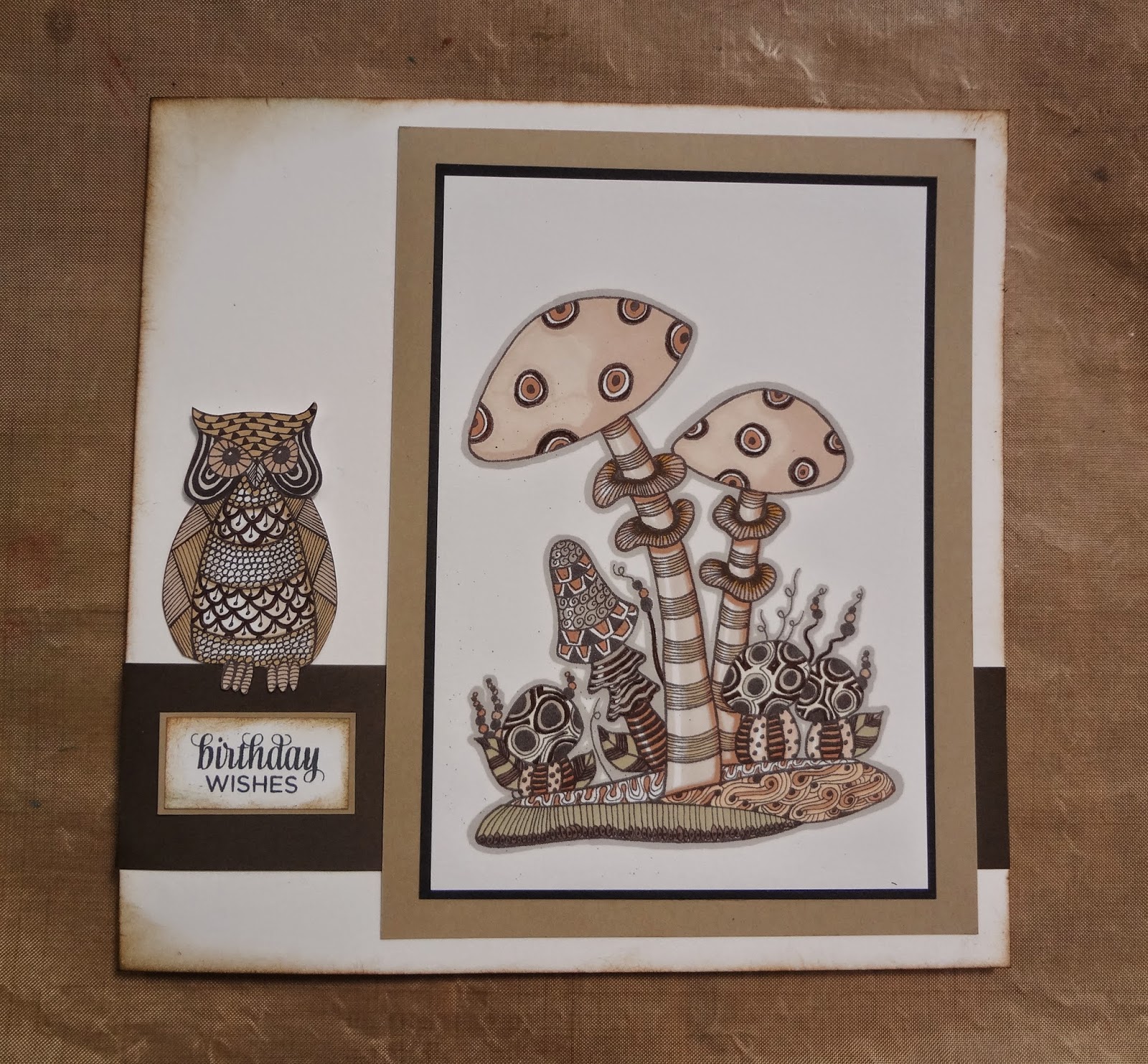 So, tomorrow I travel up to Hamilton, in Scotland, before my day at Inkspot where I'm teaching from 10am till 12pm and then demonstrating from 1pm until 4pm.
Once I finish there I'll be travelling on up to Gourock where, on Saturday, I'll be demonstrating at Cardwell Garden Centre (good thing I'll have too much to carry to be tempted by the plants!) all day.
Here's another Zendoodle card, this time using my Toadstools ready to go set which I stamped twice so I could add a second layer of the toadstool caps. 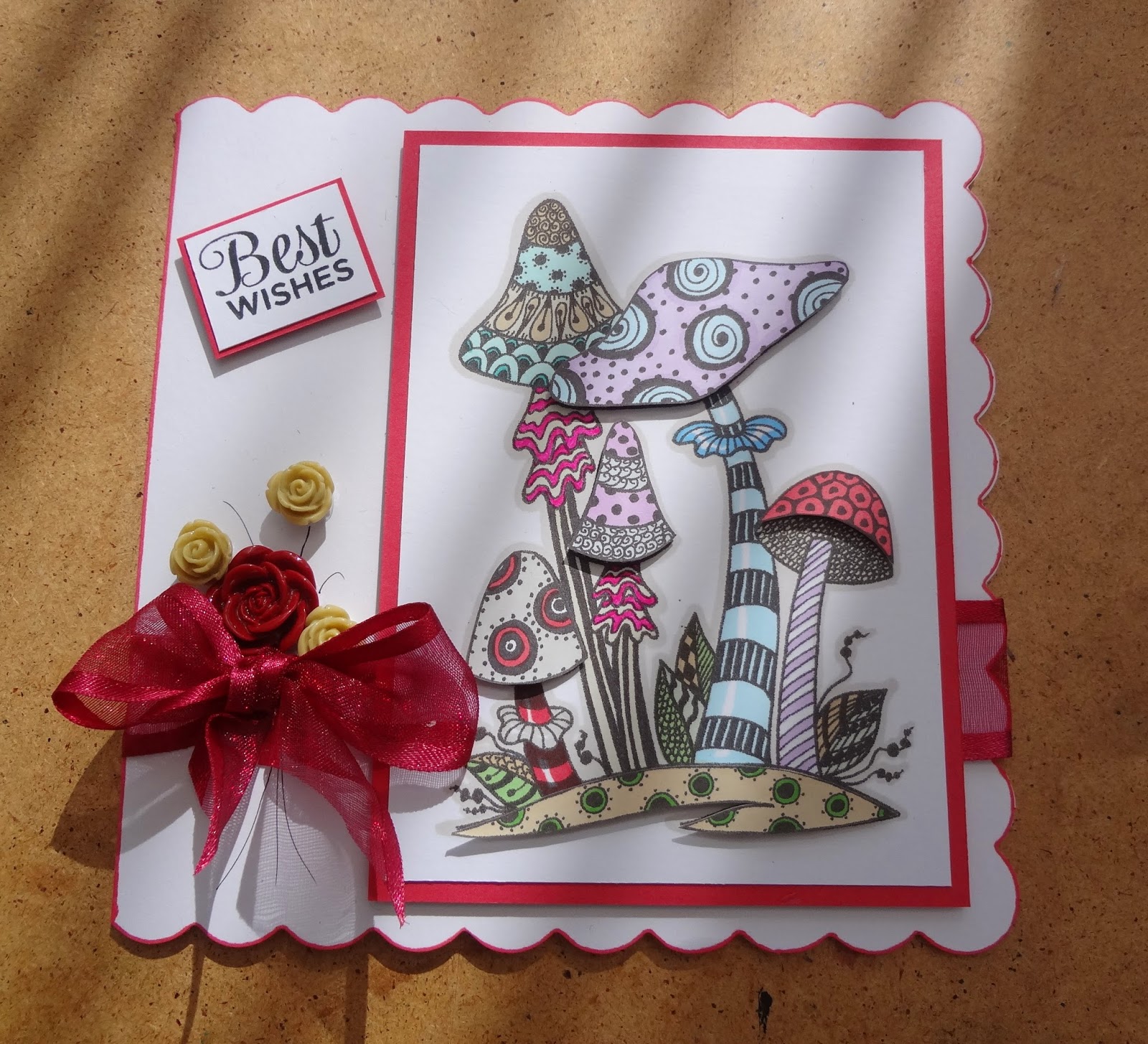 Finally, a picture of a card featuring one of the owls from my Zendoodle Owls set which I doodled and then coloured using just grey Promarkers and a twinkly gel pen for his eyes. The background is made using Distress inks and Tsukineko Shimmer Spritz in Sparkle which I swirled my card into. 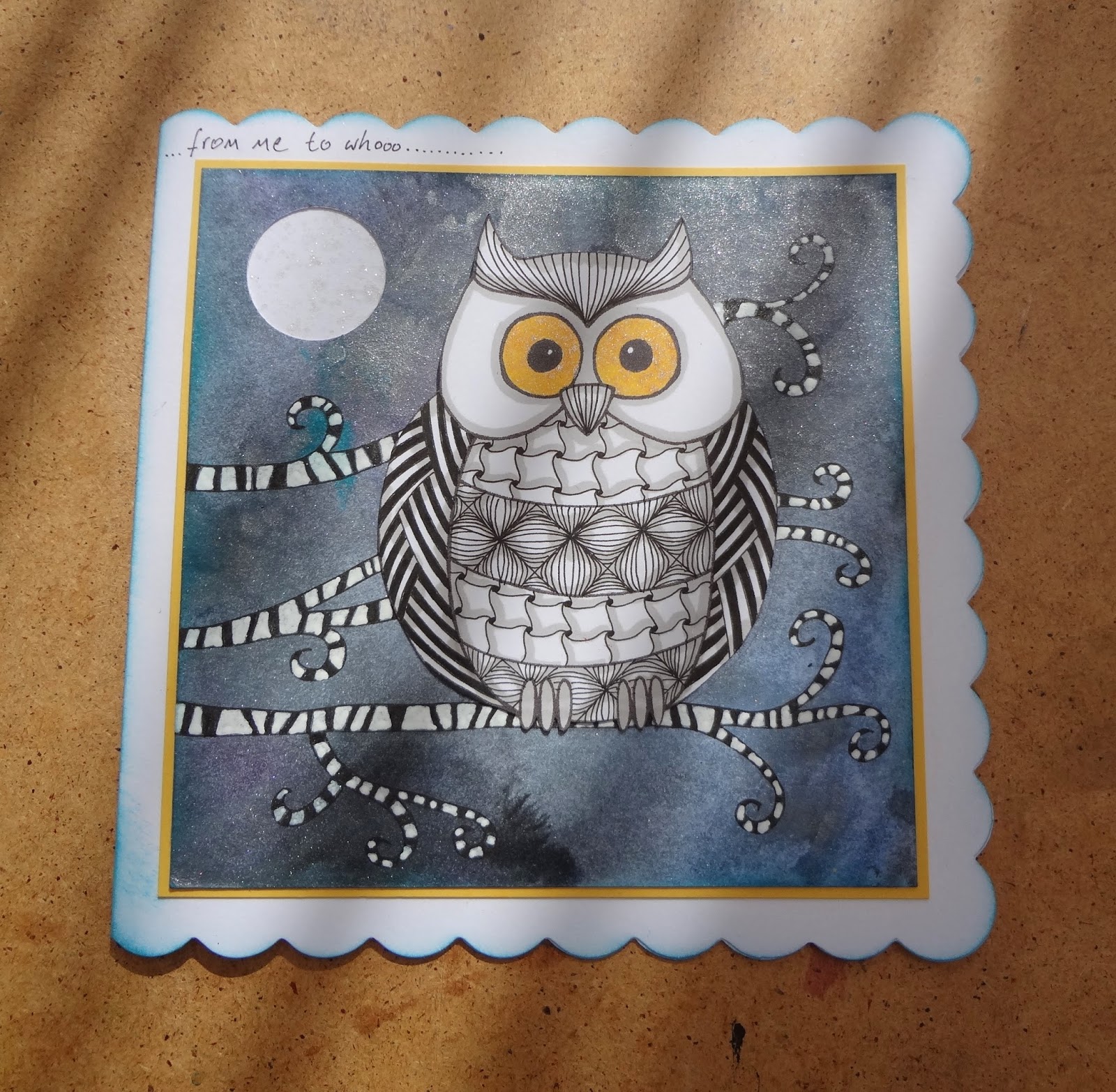 I punched a circle out of the top corner with white Shimmer spritzed card underneath. The branches were simply drawn using a black fineliner and a white gel pen and I added a handwritten phrase to the top.
Right, Heather is here now so I must dash!
Hope to see lots of my Scottish friends over the weekend!
Posted by Lindsay Mason at 10:08 am

I love that owl,your colouring is always fab,adds such movement to things.

I find my garden swallows up bags and bags of bark chippings....I am not sure what has taken more of my money...gardening or crafting!!

Fabulous examples Lindsay! Still haven't got my mitts on that toadstool set! It sounds as though your garden is going to be providing all your veggies this year. We've had to come back from caravan - Tony not well, think it may be a virus! We will get that catch up soon I hope! Hugs, Chrisx

Brilliant card examples Lindsay - and as you say, very suitable for the guys in our lives.
Hope all your train connections work out......

Loved our workshop at INKSPOT today-my upcycled wall hanging is being much admired. Thank you for your time and patience-hope to see you again at another class.
Catriona

Great Demo today wish I could have stopped longer I have written down what I did at class so now cannot wait to have another go. What are the brand of masks you use? Cannot believe when I left I slammed the car door with finger trapped inside.
Will look for your xmas stamps
Margaret