The NEC, the art of Zen and a couple of selfies!

This post is rather a long time coming after the NEC show last week! A combination of my computer deciding to throw a hissy fit, being caught up with all sorts of work and extra curricular activities and having a bout of Gastroparesis which occasionally lays me low.
Last week was really hard work but great fun too. I managed to lug all my bags and case to Birmingham International and then it was a taxi ride to the hotel and a bit of time to relax before a bite to eat. Wendy (from Card-io, whose stand I was going to be on) texted me to say that she and Martin were stuck on the motorway, waiting for the AA to tow them to the NEC as their engine had "blown up"! What a rotten start to their show. They only got to the exhibition hall in time to put the skeleton of the stand up before it closed for the night. So, it was all to be done next day and the three of us were putting stock out and setting up displays right up until the moment the doors opened! I don't know how we did it, but in an hour and a half we had managed it. This was my area with all the Sizzix dies behind me and lots of lovely MME brads at the side of me. 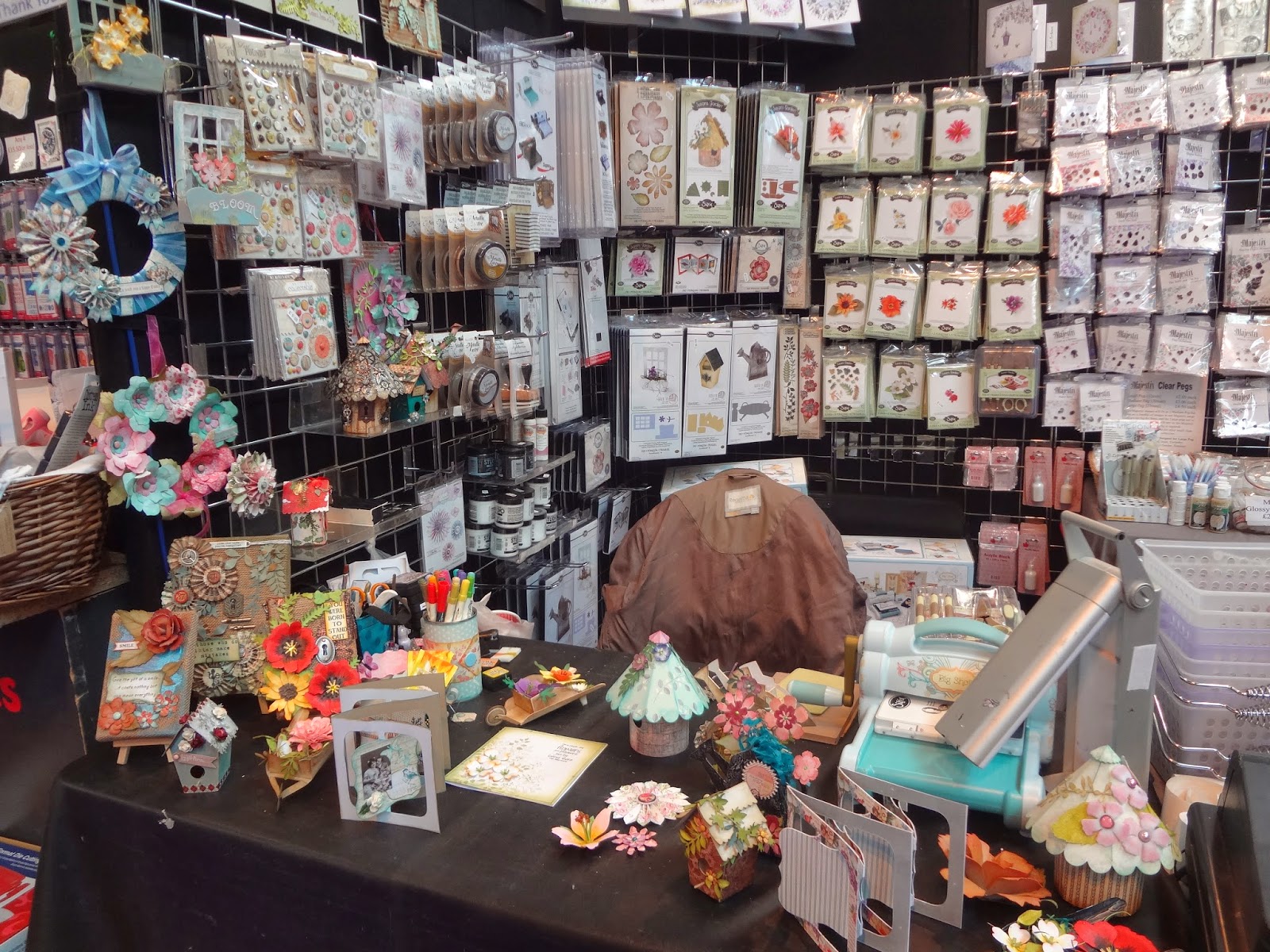 Right from the start we were busy, busy and the first day just flew by really. Everyone seemed to like my steampunk versions of the Sizzix Rounded Birdhouse. This was one that I made at the show.... 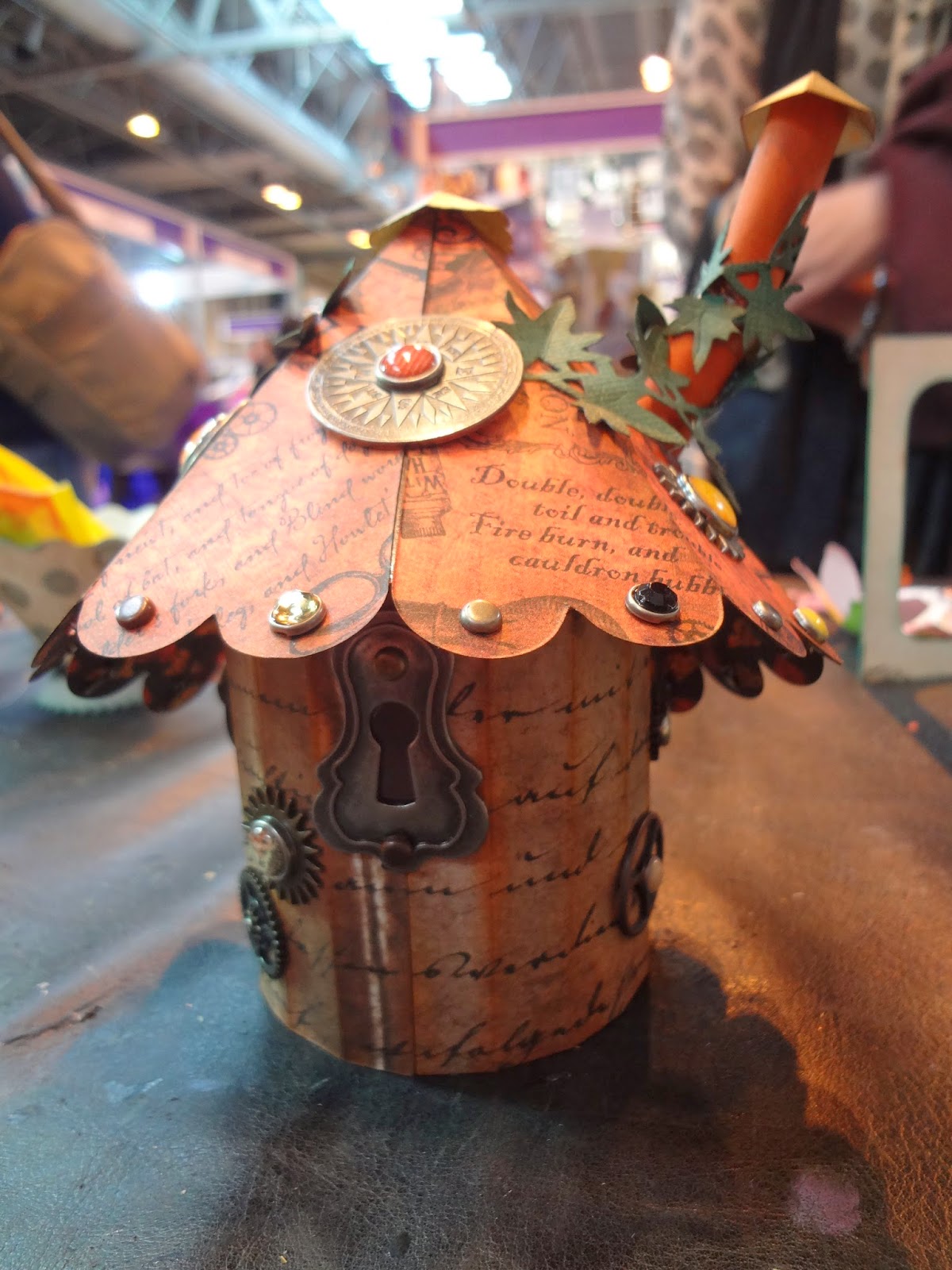 ....I used some Graphic 45 paper for the roof and, of course, lots of Idea-ology bits and pieces. I alternated simple metal brads with the MME fancy ones around the edges.
I was also working with the Susan's Garden flower dies which really are exceptionally good. They may seem a little daunting to begin with, but, once you've mastered a few basic techniques, they are actually quite simple and very satisfying to create.
Here I was adding some soft creases to the trumpet of a Narcissus..... 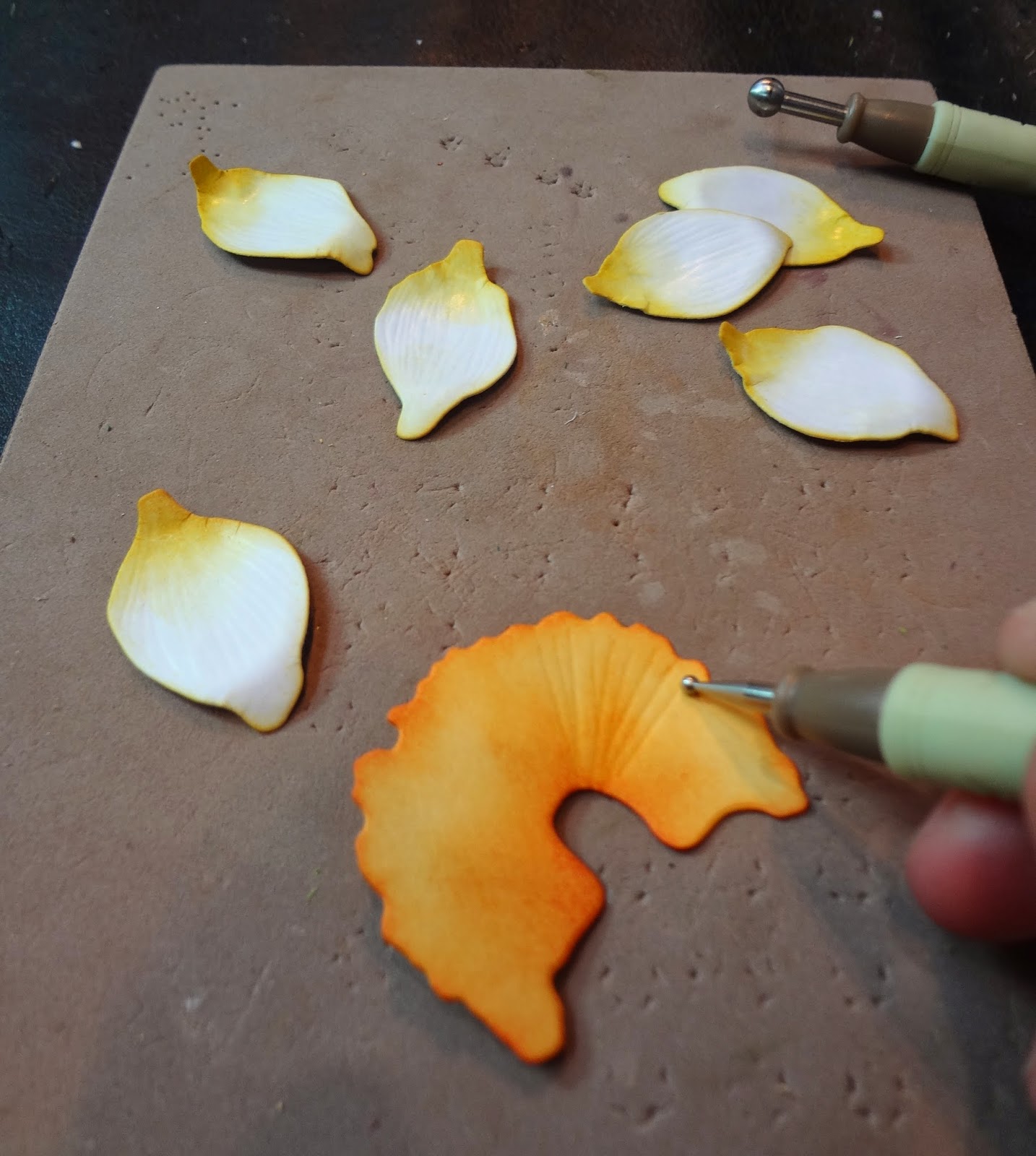 .... and you can see in the next picture how some creasing and crumpling really adds to the effect.... 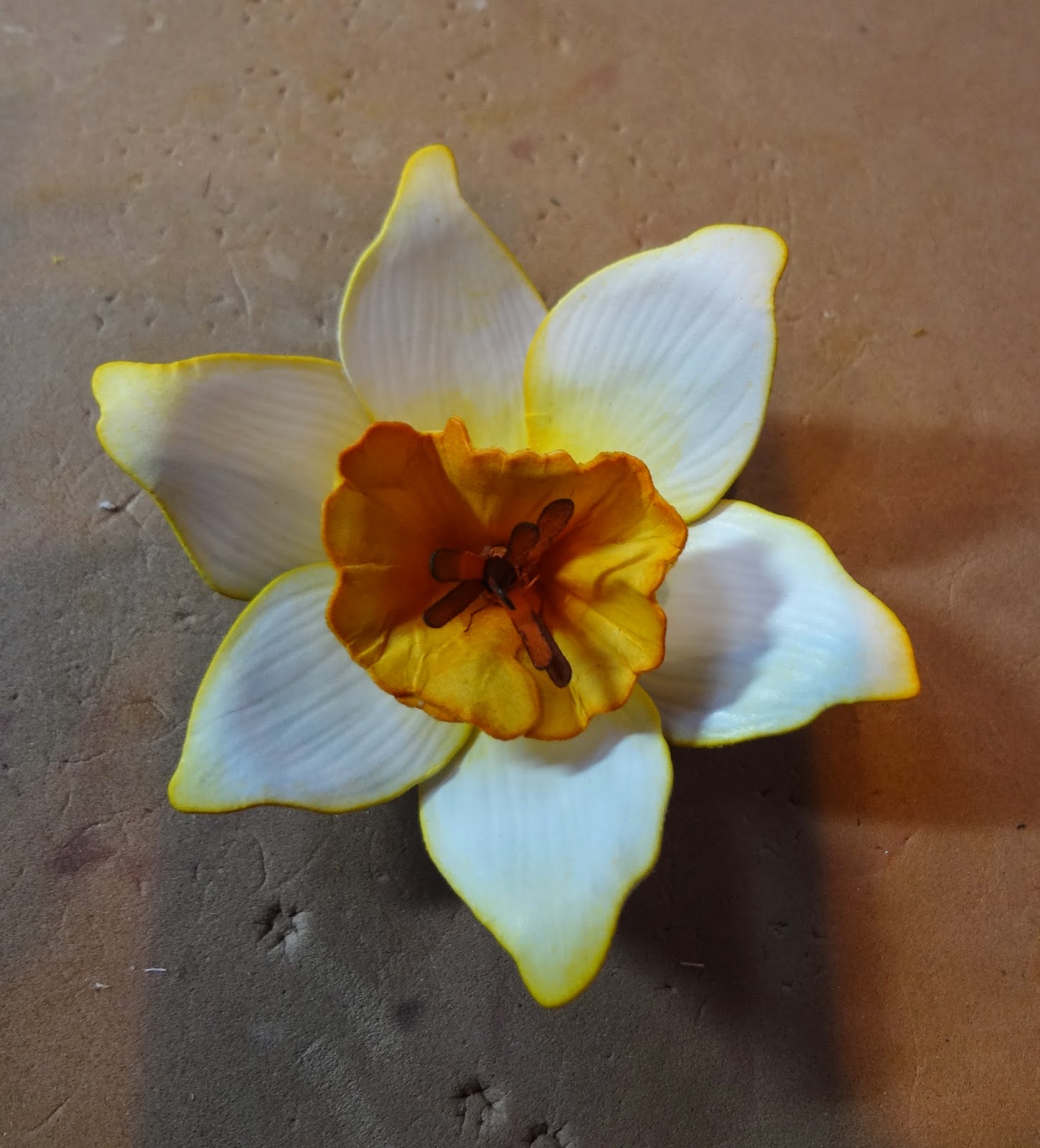 Wendy thought it might be good to combine our efforts on a card and we really loved the result. Wendy used her Greenery 1and "Say it With Flowers" stamps and I made three of the Dogwood flowers to sit on top of the images. 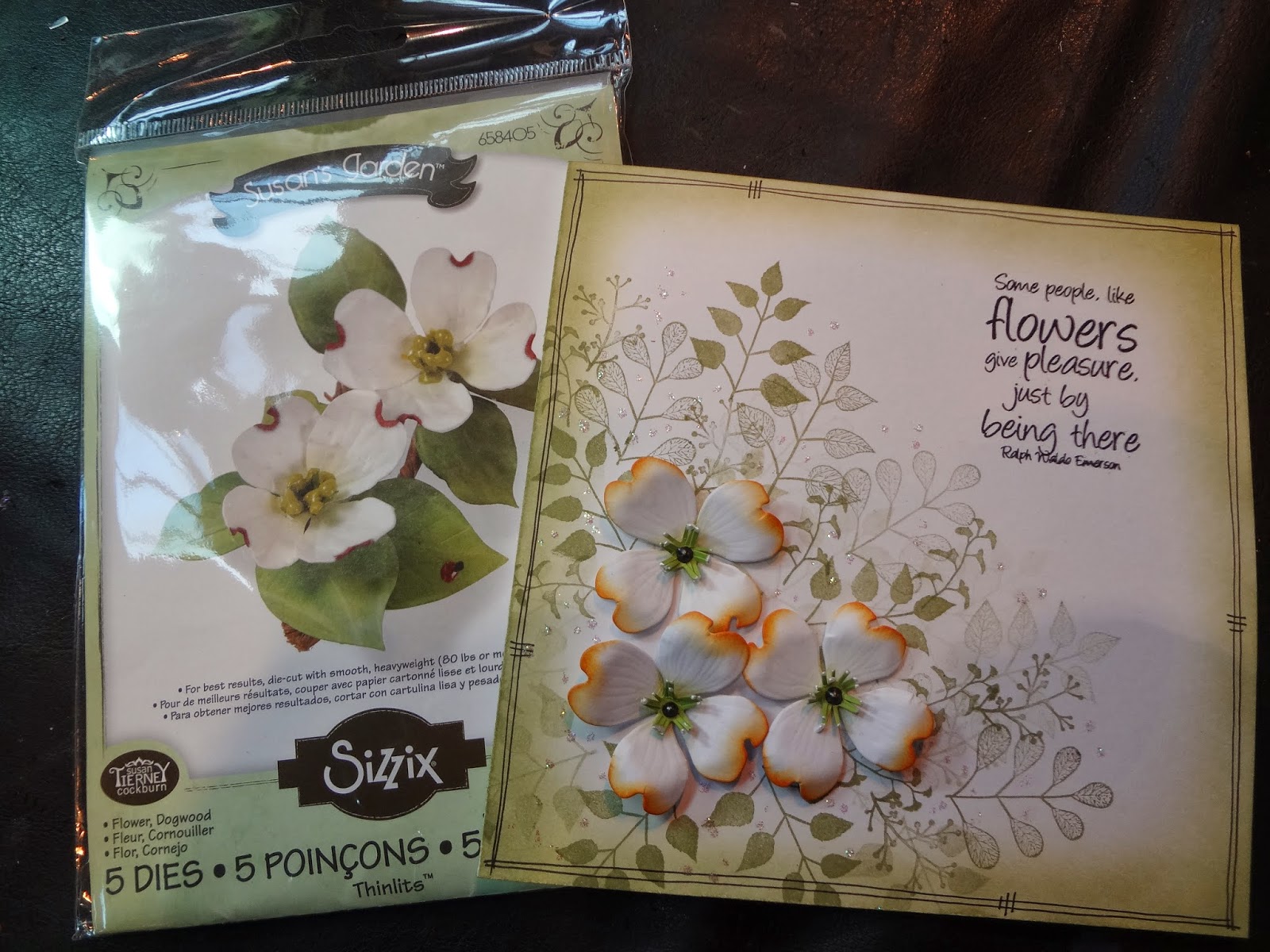 The Rosette dies were a big hit at the show and the new Dena Designs set sold out pretty quickly so I reverted to Tim's Sizzlits strip die. I used one of Wendy's stamps again to add to a simple heart plaque made from corrugated card that I painted and applied Metallic Lustre to. Love the MME brads in the rosette centres! 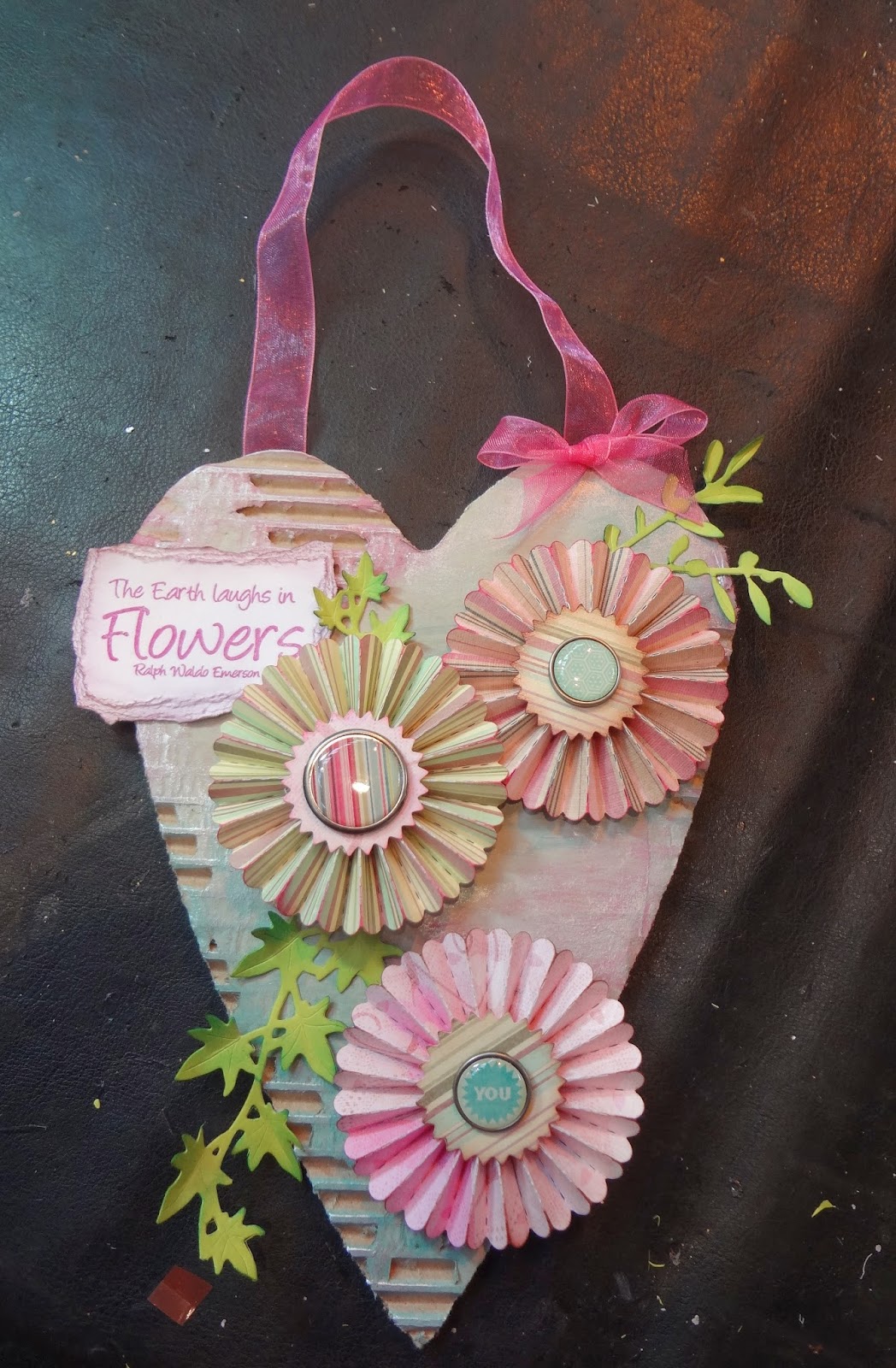 Please excuse the less than attractive background to some of the pictures, but I was taking them at my demo table!

Just to confirm (as I was asked a few times at the show) no, I haven't "changed allegiance" or given up stamping in favour of die cutting! I am doing the Sizzix die demonstrations as well as my stamping ones and especially at some of the shows. Hope that puts that particular rumour to bed! Lol!
Somehow four days went by really quickly and it was great to see so many friendly faces - some new and some familiar. Everyone was having a lot of fun spending their pennies... er ....pounds!
Poor Martin had the rotten job of waiting until everyone else had left the showground before he could phone the AA again to tow their broken van home again - what a nightmare!
The fourth day of a show always lends itself to a bit of giddiness as everyone is tired and being in the dry atmosphere of the halls for so many days doesn't help. As you can see, I was going a little crazy by the Sunday afternoon and my eyes were a bit sore!!!!! 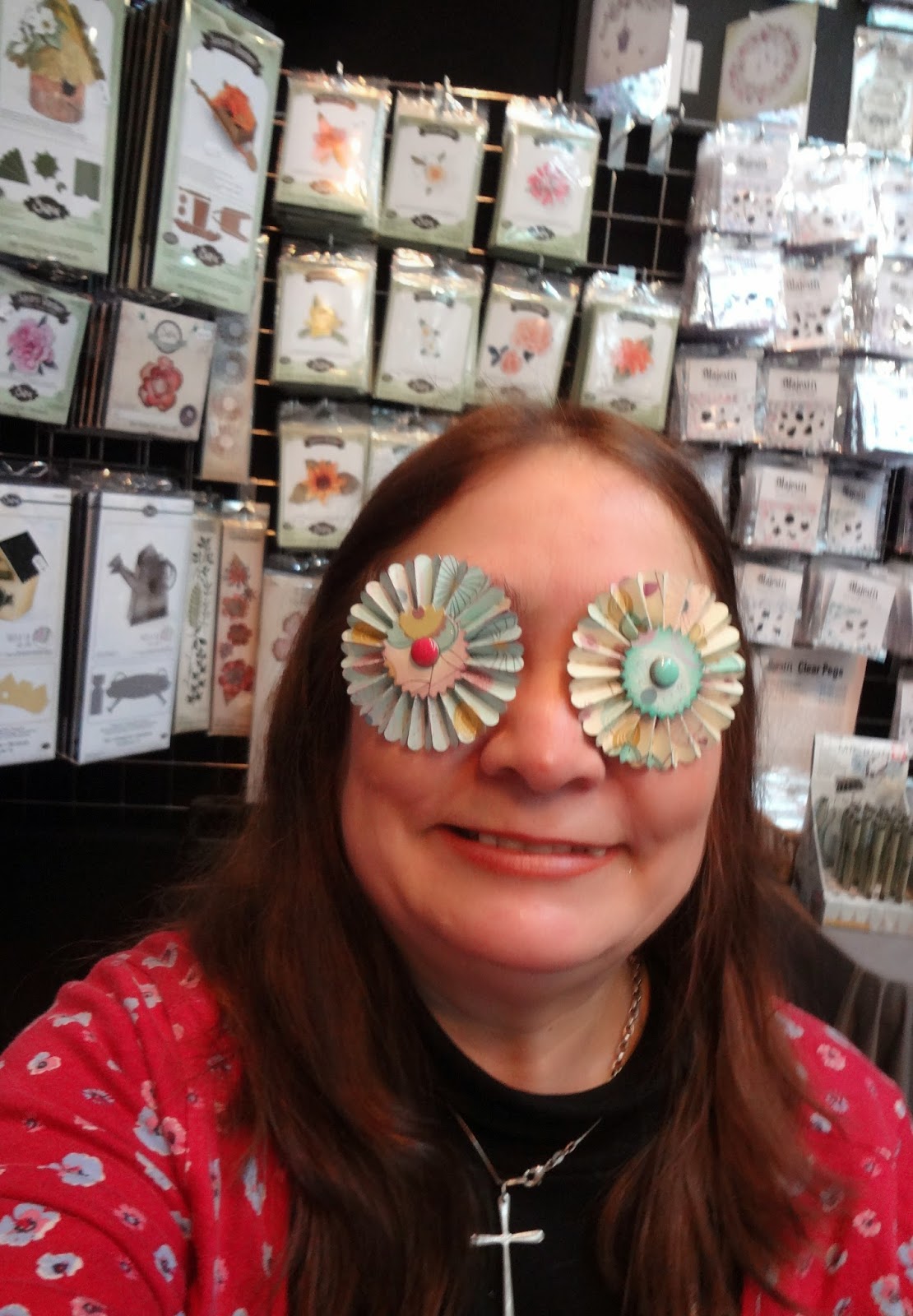 Sorry....I should have issued a warning before subjecting you to that image!
When I got back I hit the ground running with a magazine project to get done as well as samples for tomorrow's Happy Stamper's show at Port Sunlight. On Monday evening I was on the St Chad's team for the town quiz, with loads of rival teams from Poulton all competing for the trophy. We didn't win, or even come in the top three, but we did okay and didn't disgrace ourselves!
Next evening was a Lent service at church followed by a meeting of a focus group which I'm on and last night was puppet rehearsals! Between times Heather came up and we went to visit mum - it was quite a jolly visit as they had put an Elvis CD on as one of the residents is a keen fan. Everyone there is a little hard of hearing so the volume had been cranked up and I found myself singing along and even doing a bit of twisting which entertained Michael - the Elvis officionado!
I was sent back into bittersweet memories when the track "Love Me Tender" came on, as David used to sing that to me whilst holding me tightly in his arms....and he always sang it exactly like Elvis.

When I listen to that track it really could be David.....and I know how lucky I am that I've been loved so completely.

Well, until the Gastroparesis got me I was getting on with work, but I had to stop and rest which has set me back a little. I've managed to complete the new shirt that I'll be wearing tomorrow though.... 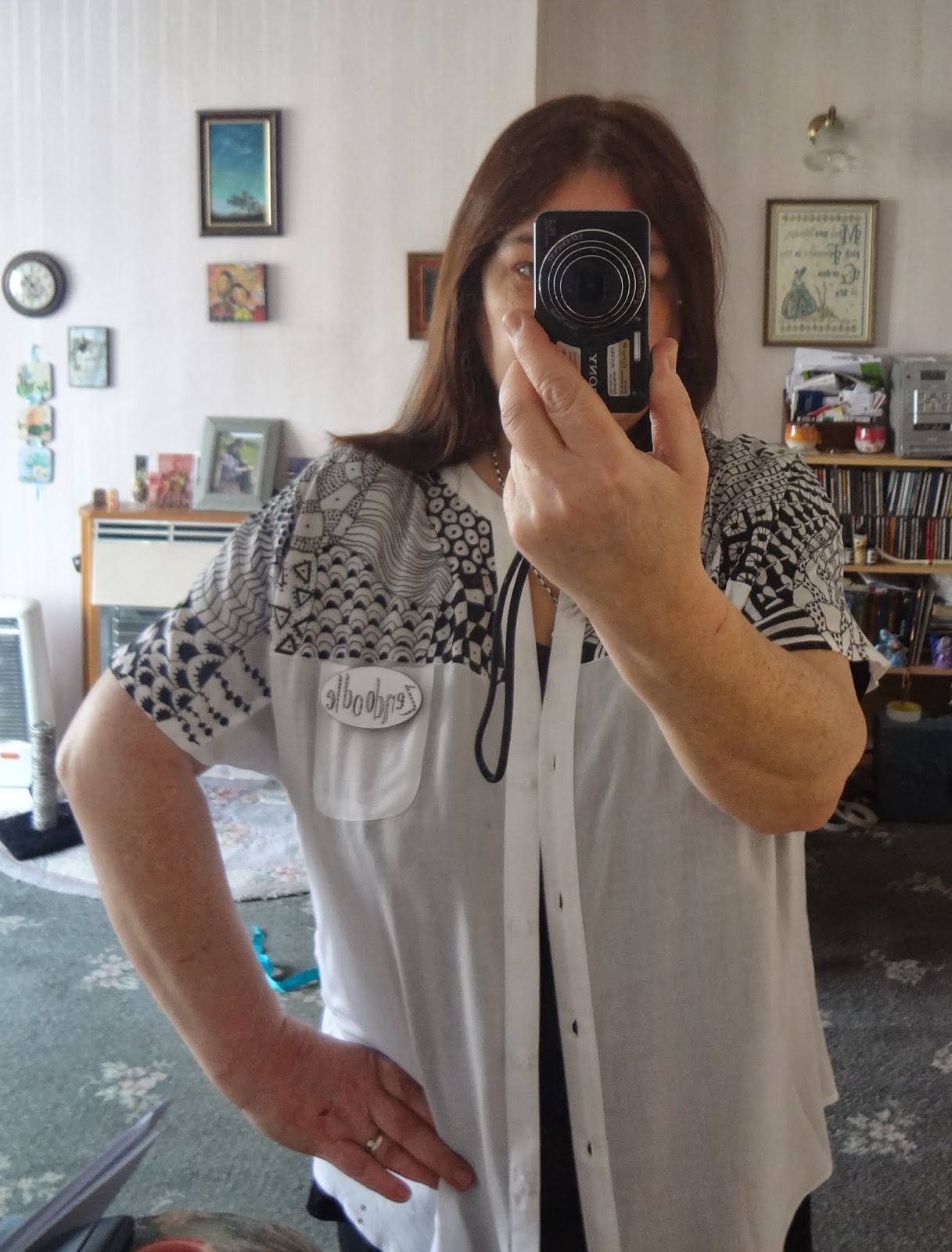 ...two "selfies" in one post! (I'm only amazed that I even know what a selfie is being the dinosaur that I am when it comes to newfangled trends and such like) I used a black Fabrico pen to draw the patterns on the shirt and then black So Soft paint from DecoArt to fill them in. It took a while as I had to be careful not to smudge anything when I was moving the fabric around. By the way - although I've been watching the Sewing Bee, I didn't make the shirt I'm afraid!!! I've made the little badge though as I thought that rather than making the shirt purely for when I'm working, if I didn't add the Zendoodle word it would make it more wearable.
So, I'm looking forward to seeing lots of you at Port Sunlight tomorrow. I believe the tickets are all sold so I'm expecting a busy day as usual at one of Happy Stampers events.
I will be Zendoodling and stamping and, generally getting quite messy in spite of myself I expect! So, I'd better get my bags sorted for tomorrow now. Do say hello if you're coming to the show and have a great weekend everyone. I'll share pictures of tomorrow after the weekend....I'm intending to take it a bit easier next week!

Posted by Lindsay Mason at 2:25 pm

God your shirt is amazing sweetie !! Love the birdhouse too !!

WOW your shirt rocks and you are looking so slim!!! I was gonna say well but in the top piccy you look a bit mad hatterish!! Thansk for sharing the pics and what you have been up too, Love Hazelxox

wow, you are keeping busy, Love the shirt, a great idea and the bird house is stunning.
Are you doing the Ally Pally show this April?

Thanks for the thumbs up for the shirt! Mark, I'm not at Ally Pally unfortunately...see you at the Craft Barn though!

Have great day at Port Sunny :) Love all your creative piccies from NEC - such inspiration!!! sorry to hear you've been ill :( And like everyone else, I love your doodled shirt! It has a gorgeous graphic look. It's stunning!!! Pxx

I missed you at the NEC, think you had gone for a coffee when we stopped at the stand and we didn't manage to get back to you either. Looks like you had a good time lol x

Great to see you and the shirt today - it really is a masterpiece! Spent too long gassing on the way round so will make up for it soon!! Love your mad selfie!!!! Chrisxx

Your narcissus is amazing, my jaw is on the floor it's so realistic. Great shirt too! I'm looking forward to seeing lots more of your sizzix creations, I love their products and used the 'Bigz scallop gift bag' to make sew some little appliqued bags last Easter. Finally, I'm a fairly new (but very keen!) fan of your lovely blog and hadn't realised that you lost your husband just two years ago, I am humbled that your faith allows you such positivity, it must be so hard to face such grief. Lots of love, Josie