My art and I

Oooogh...sorry, another terrible pun for my title! Good name for a song though! (If you're not a Richard Tauber fan you may not get the joke!) Anyway, I've been asked by quite few people about my art background, so I thought I'd put some photos of my paintings on here and a bit about what I used to do before I began designing stamps and papers. Apologies in advance for the poor photos, but these were taken before I had a digital camera or computer, so they are "snaps" really! I don't have many photographs now as a lot were lost a few years ago unfortunately. Those below are photos of photos!
I trained in Manchester and my speciality was detailed work, mainly fauna and flora (mostly British) with some landscapes as well. I particularly enjoyed painting busy foregrounds filled with grasses, fungi, ferns, snails etc. The one below is a case in point, with an array of toadstools around a tree stump. I used watercolours a lot but in a rather different way to the norm in that I used white, which is quite unusual. Each painting began with a very light, but detailed, pencil sketch. The background came next, be it a lightly washed summery sky, or more moody, atmospheric autumnal one. Next I would start to work on the largest sketched areas, such as the tree stump in this picture. The next stage being to paint white watercolour over the sketched details. This gave me a very smooth surface to paint on, in a similar way to painting over gesso, which allowed for very detailed brushwork. I would then keep working on the fine details with a 00000 brush, and my preference was always synthetic brushes, especially the golden nylon type, as I like the fact that they feel stiffer than a natural brush, more like using a pencil in a way. 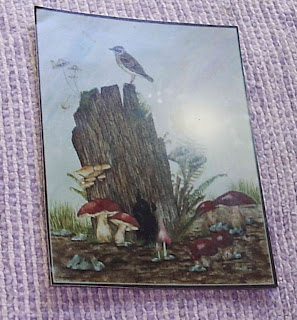 Each painting could take anywhere between a week and a month, depending on the size and subject, though I'd often work on more than one painting so that I could take a break from, say, a detailed woodland, and work on the soft fur of an animal instead.

The painting of red squirrels below was a commission from a gentleman, for his wife who was very fond of them. Unfortunately it's not a great photograph! 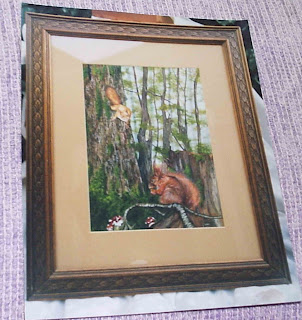 I had success with my work in many galleries and open exhibitions such as The Laing and The Mall Galleries in London's Pall Mall. Here's a picture of me with my dad after I had won an open exhibition with the central painting of "Sea Mist at Rackwick Bay". This painting depicted a foggy seascape with all the main detail being focussed on hundreds of pebbles, large and small, along the beach. Those pebbles took forever to paint! Think this picture was taken in "widescreen" as we both look a bit st-r-etch-ed! 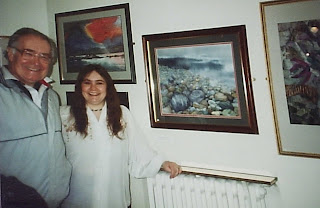 A couple of years after this, I was one of 400 wildlife artists, worldwide, to be invited to paint two pictures for a prestigious auction in Nairobi in support of the East African Wildlife Society which were raising funds for the Elephant foundation that year. It was a very exciting project and David and I transported my work, as well as other artists, down to Oxford where they were then being taken to the airport to be flown by BA (who donated the flight) out to Africa for the auction which was opened by Prince Bernhardt of the Netherlands. Exhibiting my work alongside artists like David Shepherd, Gary Hodges and Willem deBeer was a real highlight of my career, and the auction rai 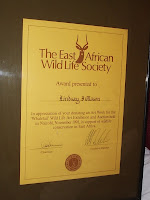 sed a huge amount of money for the foundation.
As well as wildlife themes I occasionally liked to paint landscapes and these would sometimes be in oils, such as the wintery scene below. Working in oils is so diffrent, and the smells of Linseed Oil, Turps and oil paints are so evocative that they give inspiration in themselves! 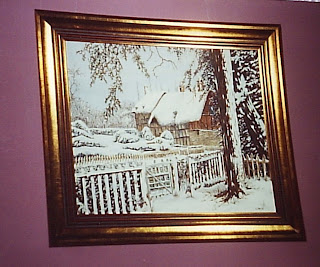 The painting below was the result of stopping by the roadside for a coffee on the way home from Scotland. I loved the scene and made some sketches, took a few photographs and painted the picture after we got home. I loved the contrast between busy foreground and peaceful panorama behind. Russell Grant, the astrologer, bought one of my landscapes featuring a country lane, as he said he could just imagine walking down there and seeing what was round the corner! 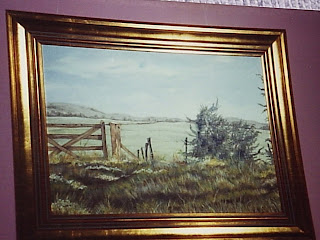 The next picture is of Blue Tits, and it's appropriate as I've been watching very similar scenes this week from my window! The adults are flitting to and from our feeders and their fledglings, who are keeping them really busy. The chattering they are doing is really loud as well for such tiny birds! 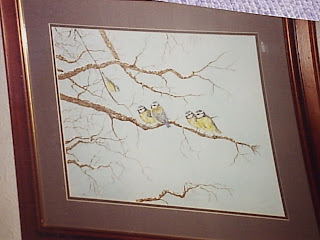 The last picture is one that now hangs in my parents' home. My mum really liked this painting which I told the lady who bought it. When she died she left the painting to my mum, so she finally did get to hang it on their wall. The subject is of an Owl being mobbed by other birds (which is what they do if they discover an owl anywhere near a nest). I kept the background very uncluttered and simple as I wanted to focus just on the birds. Whenever I hear the Magpies clacking away and the Blackbirds shouting an alarm call I wonder if they are after a poor, unsuspecting and sleepy owl! 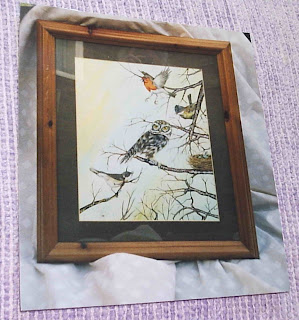 Well, I hope that you enjoyed the insight into my background. I sold many paintings over the years and David and I ran our own Gallery for a few years too. Unfortunately, as art in the UK veered into the strange world of installations and more abstract forms, I found that I needed to change the focus of my work. My interest in crafts had been there since I was a young child and I have always enjoyed creating a wide variety of things. It is a very long story, but I began to design stamps for Personal Impressions about seven years ago and it's something that I really enjoy. Seeing what people create with the stamps is as much a thrill as it was when I first began. Now I'm working on other things such as papers as well, so there is always something new to excite me. Sadly, because my work keeps me so busy, I really don't get the opportunity to paint "pictures" anymore, but I love being able to show people who think that they aren't artistic that they, too, can create something unique and to be proud of.
Posted by Lindsay Mason at 7:11 pm

This is what I call 'proper' art. Paintings that resemble the subject. I am so in awe with these masterpieces that they made me cry.
Luv Joanne xx

WOWOWOWOWOWOW I love them all. My favourite thing when I lived in London was to walk round the National Gallery. I could spend all day looking at the "proper Paintings" Yours are all stunning. Thanks for sharing with us. Hazelxoxox
P. S Big Hugs Joannexoxoxox

Love your paintings especially the snowy one. Looks like you need to find a little time for yourself and start painting again!

Wow these are absolutley stunning. You are one extremely talented gal. I'm surprised you don't paint any more - have you thought of doing illustration work for books or similar? I'm a big art fan and love nothing better than to walk around galleries though you'd tut at me for my love of the abstract lol. Thanks for sharing your art, it is wonderful to see your beautiful work. Pxx

Wow Lindsay your paintings have taken my breath away, you truly are a very talented lady in many ways. Long may it continue and look forward to the papers you are working on. Thank you so much for sharing your art with us. Take care, Yvonne xx

oh my stars, lindsay, your work is phenomenal! I'm am indeed envious of your talent ( i know it's a bit of a sin, but, hey), I knew you were good but I had no idea how good. RESPECT!
ps
are you on facebook???

These are wonderful Lindsay

So love the Scottish scene. You captured us perfectly

Teaching art and crafts was amazing there

Keep painting you are awesome xxxx